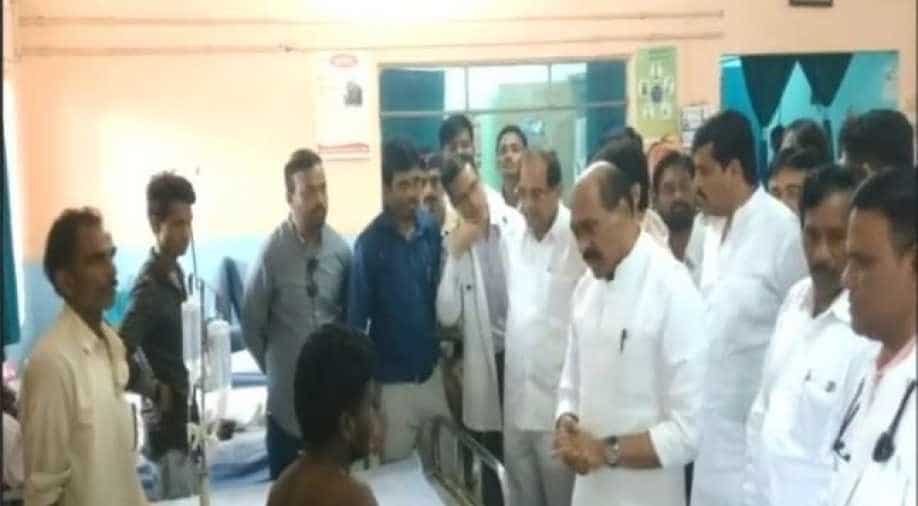 Over 700 farmers in Maharashtra's Yavatmal city have been hospitalised, a farmers' leader said. Photograph:( ANI )

Over 700 farmers have been hospitalised and 25 have lost their vision, the farmers' leader said, adding that no relief had been granted so far

Twenty farmers have died in Maharashtra's Yavatmal city in the last one month after inhaling pesticides while spraying, a farmers' leader said on Sunday.

Over 700 farmers have been hospitalised and 25 have lost their vision, Devanand Pawar, the farmers' leader told ANI, adding that they were "getting no relief."

"Farmers are getting no relief, instead they are losing their lives like this.We will drag this matter to court," Devanand Pawar said.

The chairman of the government organisation, the Vasantrao Naik Sheti Swavlamban Mission (VNSSM), Kishore Tiwari, said that the farmers were not taking precautions including
covering their faces.

Mr Tiwari said an investigation would be conducted and if the medicines were found to be highly toxic, a ban would be considered.

He added that a top official of the quality control and disaster management team was active in the area.

"Farmers not taking necessary precautions. They should cover faces. There is intense heat so shouldn't spray during that time," Kishore Tiwari said.

The first farmer death was reported in early August, a media report said, adding that they had not worn any protective gear.

The farmers who are hospitalised are suffering from symptoms including blurred vision, dizziness, nausea, headaches, and skin rashes.

Yavatmal has already witnessed a high number of farmer suicides due to the agricultural crisis.