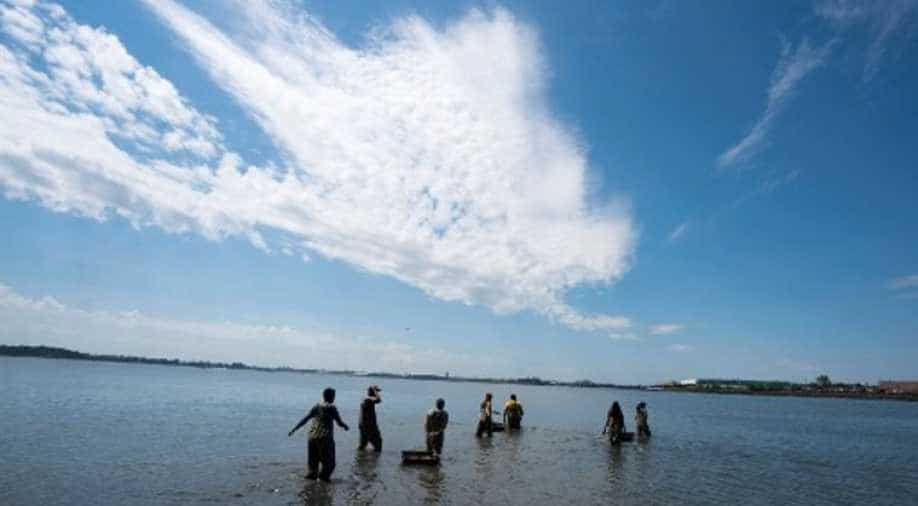 Reef monitoring and data collection of oysters and other marine life Photograph:( AFP )

A report earlier had stated the area of the island has reduced from 16 hectares in 1986 to two hectares in 2014.

According to a report, the Vaan Island, a small strip of land between India and Sri Lanka, has been fast disappearing putting the India's biodiversity at risk.

The Gulf of Mannar extends from Rameswaram to Kanyakumari.

UNESCO describes the Gulf of Mannar Biosphere Reserve as one of the world’s richest region in marine biodiversity. It has  4,223 species of plants and animals making it "one of the richest coastal regions in India." According to UNESCO, the reserve has a "specialized ecosystem" with a unique "large marine ecosystem".

The island is also widely used by Indian fishermen whose livelihood will be at risk if the island disappears. At least eight-four per cent of the island was submerged due to sea-level rise hitting the local tourism and fishing activities.

In a book named Shrinking of Vann Island, researchers had predicted that by 2022 the islands will be completely submerged into the sea.

Large scale fishing, including rising sea levels have been blamed for the current state of the Vaan islands. Mining of corals has also degraded the island, according to a study by researchers which was finally stopped in 2005. Indian authorities have in the past several years have been trying to rehabilitate the coral vegetation in phases.

Erosion has also seriously affected the islands with the area shrinking rapidly with global climate change also leading to rising sea levels, according to analysts.

85-year-old dies of coronavirus in Alwar; 32 test positive in Delhi