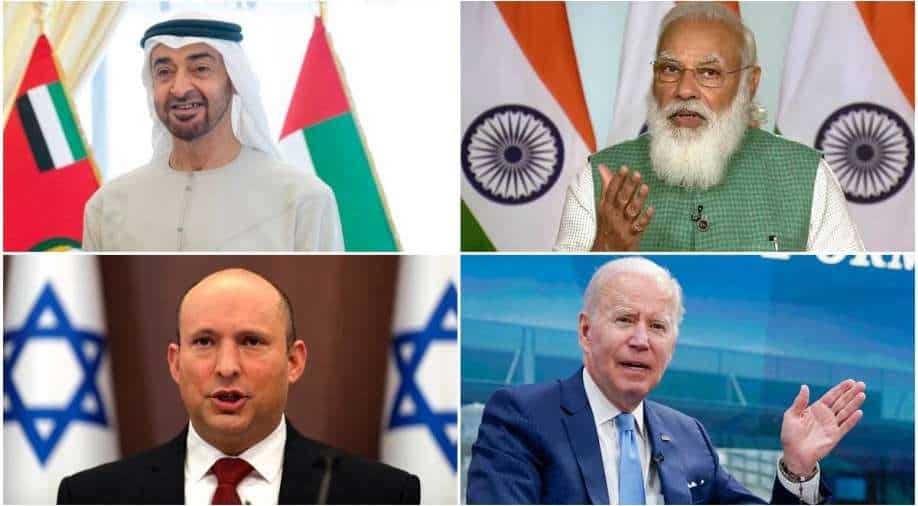 The I2U2 nations and their leaders Photograph:( Others )

I2U2 referred to as West Asian Quad by few experts attempts to strengthen India's position in the region by collaborating with UAE and Israel on economic, oil, energy, and defence matters. Additionally, partnering with the US other than in the Indo-Pacific enhances Indo-US relations.

On July 14, 2022, the heads of government of India, Israel, United Arab Emirates (UAE), and the United States of America met at the first leader’s summit of the I2U2 group. The grouping emerged from the 2021 Foreign Ministers’ meeting of the four countries when it was called International Forum for Economic Cooperation. The first leaders’ summit was exploratory, and the participating countries agreed to focus on investments in six sectors- water, energy, transportation, space, health, and food security.

The apparent outcome of the first meeting was that it gave clarity on the nature of the grouping. The grouping is said to be purely economic as it focuses on the geoeconomic aspects of capital investments for improving infrastructure, climate change action, and public health access.

With its diplomatic prowess, India has been a part of major economic initiatives in its neighbourhood in the form of the Indo-Pacific Economic Framework, BRICS, and now the I2U2. The I2U2 allows India to secure investments from Israel, UAE, and the US, emerge as an alternative renewable energy hub and diversify the supply chain mechanism. The I2U2 grouping is India’s continued legacy of cultivating harmonious and economically beneficial relations with West Asia under its Look West policy. The article explores India’s opportunities concerning the I2U2 grouping and assesses the group from a lens of continuation of the broader Look West policy.

The cooperation between India, Israel, United Arab Emirates, and the US is a game-changer as these countries have come together to fulfil geoeconomic objectives of enhanced investments and tackle global challenges. For India, the I2U2 grouping is of particular significance as it places New Delhi in a position to leverage its strategic relations with Israel, UAE, and the US to build mutually beneficial economic partnerships without any adverse impact on its domestic commitments. During the summit, it was announced that UAE would invest $2 billion to develop sustainable and hi-tech integrated food parks in India’s Gujarat and Madhya Pradesh.

The investment in food parks will give an impetus to the Indian agricultural system as it will help in more agricultural output with cooperation from the Israel-UAE state and private sector. The investment also points toward the sustainability advantage that will benefit India as the food parks will address the food waste problem. Regarding geoeconomic features, the investment will enhance food security in the Gulf region, with India getting space to negotiate on energy security.

Additionally, the I2U2 grouping focuses on private capital investment and technical expertise to solve waste treatment problems, health access, and start-up linkages. India stands to gain from these investments as India’s start-up industry is increasing quickly. The investments in start-ups and their linkages with other countries will provide an impetus to entrepreneurial innovation and the creation of more such ventures. Apart from the food security and start-up-oriented investment, the grouping also benefits India with its Clean Energy initiative.

The initiative looks forward to establishing a hybrid renewable energy facility bringing together wind and solar energy for energy conservation and promoting a sustainable enterprise. The clean energy project aligns with India’s commitment to reducing carbon dependency in the Paris Agreement. Hence, India stands to gain from the I2U2 grouping as it is an opportunity for India to cooperate with UAE and Israel to make a stronghold in the rest of West Asia.

It would not be an exaggeration to say that the I2U2 grouping is a continuation of India’s Look West Policy. India has had trade partnerships with West Asia in areas of energy and oil since the 1990s. In 2014, with the coming of Narendra Modi as Prime Minister, in line with the Look East policy, he charted a new approach focusing on building strategic relations with West Asia. Under the Look West policy, India determined to fulfil its national interest without getting involved in the regional politics of the Arab world.

India’s approach to engaging with West Asia establishes a common ground for cooperation. The relations between India and West Asia rest on government-to-government (G-G), business-to-business (B-B), and people-to-people (P-P) contacts. In May 2022, India and the United Arab Emirates signed the Comprehensive Economic Partnership Agreement (CEPA), which is expected to increase the bilateral between the two countries. Similarly, India shares historical relations with Israel owing to its defence requirements. Saudi Arabia is another partner of India in West Asia, actively investing in the Jio platform of Reliance Industries.

Therefore, the I2U2 complements India’s Look West Policy as it strengthens its position in the region by collaborating with UAE and Israel on economic, oil, energy, and defence matters. Additionally, partnering with the US other than in the Indo-Pacific enhances Indo-US relations.

Grants India an advantage in the region

The Look West Policy has positioned India in an advantageous position as its relations with the OIC have improved while remaining a balancer in the region by not taking sides between the Arab world and Israel or Saudi Arabia and Iran. The I2U2 presents an opportunity for India to enhance its partnership with the Arab world and strengthen its stance on harnessing relations with all regions. The grouping is a platform where countries can multilaterally invest and cooperate.

India should continue to diplomatically engage with West Asia to continue its multilateral approach to international relations while also focusing on building more people-to-people contacts. The I2U2 grouping allows India to act as a balancer in the region by engaging with all countries in a geopolitically charged region.