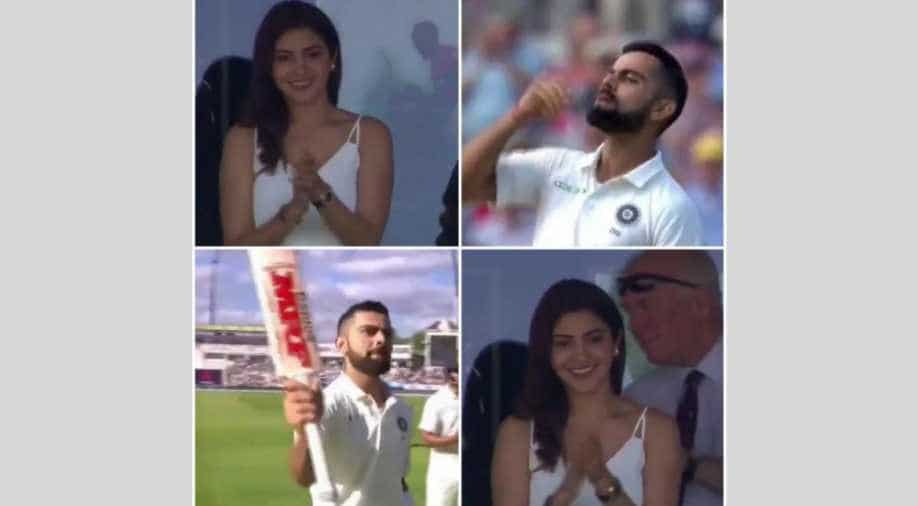 Indian cricket team captain Virat Kohli did something never seen before, in more than one way. As he scored his 22nd Test century, the first in England, Virat also displayed his affection for star wife Anushka Sharma. While this might not be the first time he did so, Virat is, with one knock at a time, normalising PDA for Indians.

As he hit a century off 172 balls with the help of 14 boundaries, he kissed his wedding ring -- the one he wears in a chain around his neck. He took off his helmet and pointed it towards Anushka who was cheering for him in the stands. Anushka kept on cheering for him.

Virat Kohli and actress Anushka Sharma got married in a hush-hush ceremony in Tuscany, Italy on December 11, 2017. Their videos obviously made the rounds even though they tried to keep the ceremony limited and exclusive to only a handful people. The couple has since been on assignments but what’s interesting to note is that the two still take out time for each other. Anushka makes it a point to visit husband on his matches whenever she can while Virat takes out time to meet her on shooting sets.

Currently, the duo is in England where India is playing against the England team.

Anushka is meanwhile busy with Sui Dhaaga: Made In India with Varun Dhawan. She will start the film’s promotions August 7, 2018, onwards. She will also be seen alongside Shah Rukh Khan and Katrina Kaif in Zero that is slated for a December release.