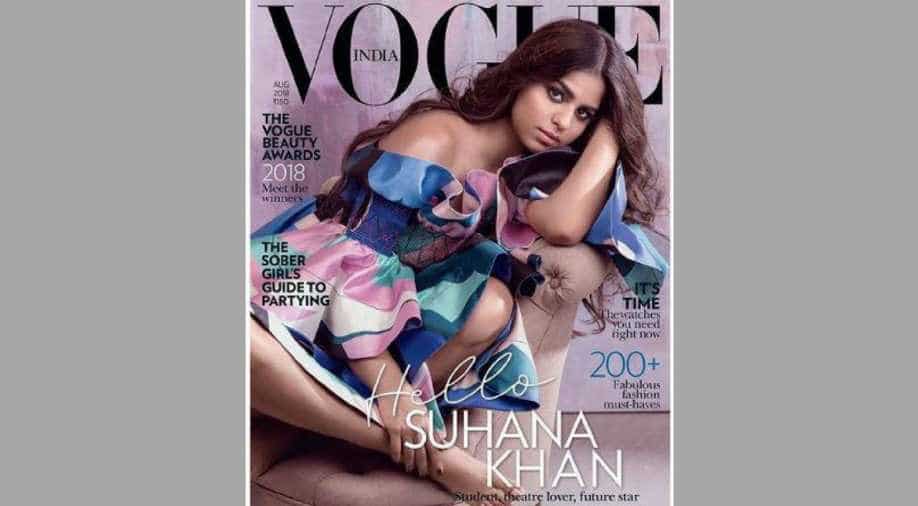 Being the daughter of one of the most loved stars in the world is tough but Suhana Khan is keen on making her own mark as she takes baby steps in the glamour industry. Poised as the new face of fashion magazine Vogue India’s latest cover, Shah Rukh Khan’s daughter, Suhana sizzles like a true fashionista.

This will be her first ever magazine cover and boy, how she nails it!

Dressed by celebrated designer Emilio Pucci, Suhana can be seen wearing a multi-coloured outfit as she gives a long stare at the camera while sitting comfortably legs crossed on a powder pink coloured sofa. The colours in the frame gel with the mood of the photo and leave you asking for more. Interestingly, Suhana looks different than all the times she has ever made a public appearance -- probably because she has mostly been pictured with her father, Shah Rukh Khan or mother, Gauri Khan.

As for the cover, she has been styled by the editor of the magazine, Anaita Shroff Adajania.

In the interview, Suhana talks about her acting aspirations, her family, love for theatre and more. She got very excited when she was made the offer. On her experience, she said, “I absolutely loved shooting this cover. Especially the dancing shots. I love dancing. It was so much fun. I was excited when my parents brought it up. I wanted to say yes straight away, but they wanted me to think about it—this is a very public thing. They wanted me to gain confidence from the experience, not lose it.”
She is currently in Mumbai on a short break as she is a student in England.

Echoing her father’s sentiment that she must pursue studies before entering the world of acting, she said, “There’s so much to learn, and one way to do it is to start [working] early, but first I want to go to university and finish studies." On when she knew she wanted to act for a living, Suhana said, “I don’t think there was any one moment when I decided. Since I was young, I’d do all these accents and impressions. But my parents only realised I was serious about acting when they saw a performance of mine for the first time. I was playing Miranda in a school performance of The Tempest.” She also spoke about similarities with her superstar father. Shah Rukh wants her daughter to become an actor and not be launched like a born star. He added, “Suhana’s not working towards a promise of being cast, she’s working towards being an actor, and she knows that. I keep insisting that I don’t want them designed as stars, I want them to be launched when they are good-enough actors.” Suhana is on the cover of Vogue India August Issue.

Another actress who had recently made her Vogue magazine cover debut was late actress Sridevi’s elder daughter, Janhvi Kapoor. She did so right before her first film, Dhadak came out.