SRK's daughter Suhana gets featured on the cover of Vogue; Twitter isn't impressed 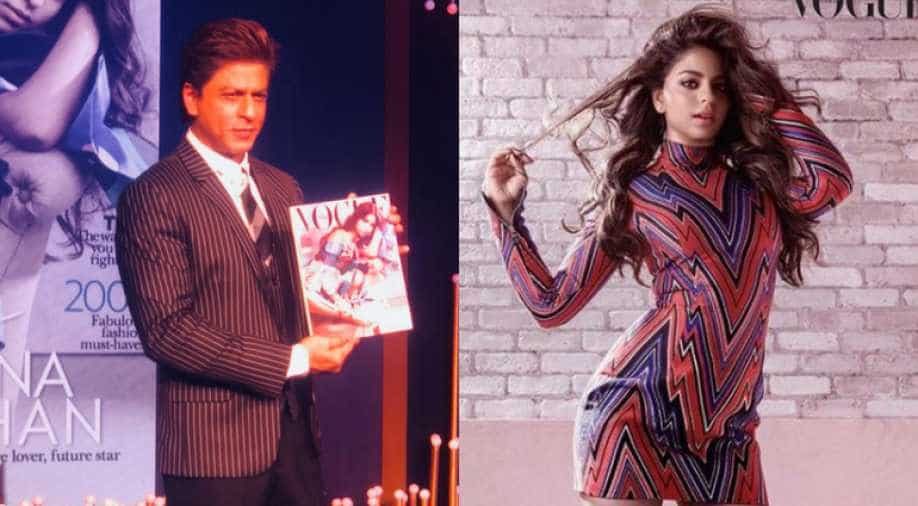 On Wednesday, at the Vogue Beauty Awards, superstar Shah Rukh Khan unveiled the latest issue of Vogue India Magazine. The cover girl for the August issue this time is SRK's 18-year old daughter Suhana Khan.
Both Khan and his wife Gauri took to their social media accounts to officially introduce their daughter to the world.

Khan tweeted, "Holding her in my arms again thanks to Vogue. 'What imperfect carriers of love we are...' except when it comes to our children. So sending u all my love & a big hug. Hello Suhana Khan!(sic)"

While the proud parents gushed over their daughter's grand debut to the world of glamour, there were many on Twitter who called out the magazine for featuring a teenager whose only achievement was that she was a superstar's daughter.

"I understand nepotism, I understand easy starts and quick access due to genes or contacts with those who hold the reigns. However, if you are untalented, no matter how much you try you will bite the dust. Time will tell if the safar of #SuhanaKhan would be Suhana at all," wrote a user.

Really don't believe in celebrity bashing, but why is Suhana Khan is on the cover of Vogue?

Technically this isn't even celebrity bashing, because she's not one, her father is.

My dad is an accountant, will ICAI put me on their monthly magazine cover?

Student, theatre lover, future star, daughter of a star who will probably finance all her movies till she actually becomes a ‘star’.... but yea hello Suhana Khan.

Suhana khan gets to be the face of a leading magazine just for being SRK's child where there are girls busting their asses in various fields to get half of that recognition is where it's at.

I am a struggling TV actor and I'll tell you why people and other fellow struggling actors including me are annoyed because Suhana Khan is on the Vogue India cover. But before that, let me tell you my credibility. I have worked in a few episodics, 3 digital ads and a DD1 show.

Suhana Khan is on the cover of Vogue because.....?

While unveiling the cover SRK carefully worded his speech and said that how being a star-kid comes with added responsibility.

"I think star kids have their own personal issues, of course, they’re entitled and in today’s world with social media it’s nice that you’re recognised, but where I come from, a middle-class background, where someone has worked with some of the most beautiful and loveliest of people like Katrina [Kaif], and all the other people here present, I got this opportunity, and things went well for me. But kids are kids, children are children, changing the world. And sometimes, you need the assistance of friends to give them a little more confidence, self-belief and self worth. So I want to thank Vogue for taking my little daughter and putting her on the cover of Vogue. I’m extremely thankful. “I hope it’s not taken as ‘entitled’ just because she happens to be Shah Rukh Khan’s daughter. I just hope it’s taken as a responsibility that she has if she’s being given a platform like this, a solo cover for Vogue, which I incidentally have never gotten. I just want to say thank you very much for putting her in a place where the responsibility you’ve put on her is going to remove some of the entitlement she has because she happens to be my daughter. And Inshallah she’ll work hard towards that, "the actor said in his speech.