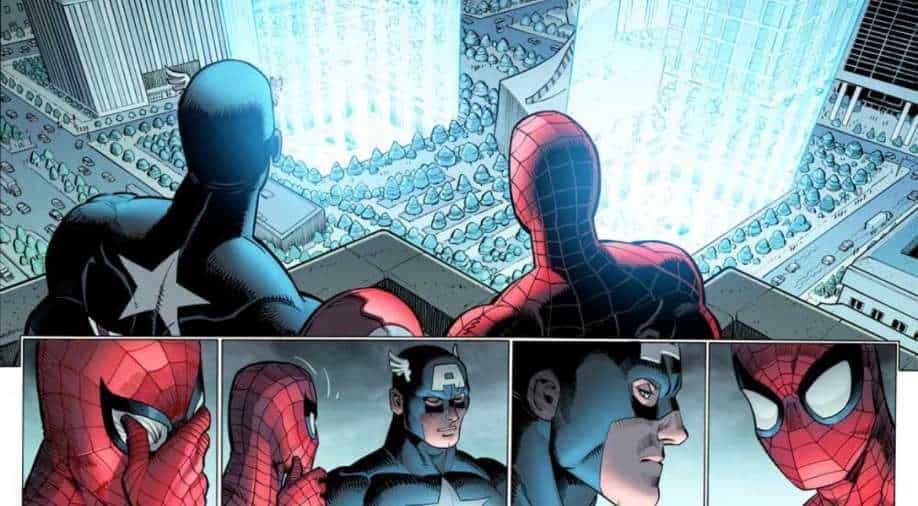 Captain America and Spider-Man gaze upon the towers of light in downtown Manhattan on the anniversary of Sept. 11 Photograph:( The New York Times )

Quesada, creative director of Marvel Entertainment, grew up in Queens and was a natural for the assignment. “I’m a dyed-in-the-wool New Yorker,” he said.

On Wednesday, “The Four Fives,” an eight-page story from Marvel Entertainment in remembrance of the lives lost on September 11, will be published. In the nearly dialogue-free comic, Spider-Man and Captain America are in downtown Manhattan as the Bell of Hope, in the churchyard of St. Paul’s Chapel, rings in a pattern of “four fives” (five strikes, four times): a long-standing ritual that signals a firefighter has fallen. The comic was written by Joe Quesada, drawn by John Romita Jr. and Scott Hanna, colored by ​​Marte Gracia, and lettered by Joe Caramagna.

Quesada, creative director of Marvel Entertainment, grew up in Queens and was a natural for the assignment. “I’m a dyed-in-the-wool New Yorker,” he said.

Still, inspiration did not come right away. “It was tough to even think about going back to that time. It was horrific for all of us. I didn’t want to relive it.” And then he thought about the tradition of the “four fives,” and he was inspired to use each strike of the bell to depict a moment of remembrance across the United States.

He gave Romita freedom in choosing what to depict, except for one note: “Let’s make sure we stop in Pennsylvania and the Pentagon and the memorials. It was a massive attack on our country. It wasn’t just the twin towers.”

The story is included, at no additional charge, in the following comics on sale Wednesday: Amazing Spider-Man No. 73, Daredevil No. 34, Excalibur No. 23, Ka-Zar: Lord Of The Savage Land No. 1 and X-Force No. 23.