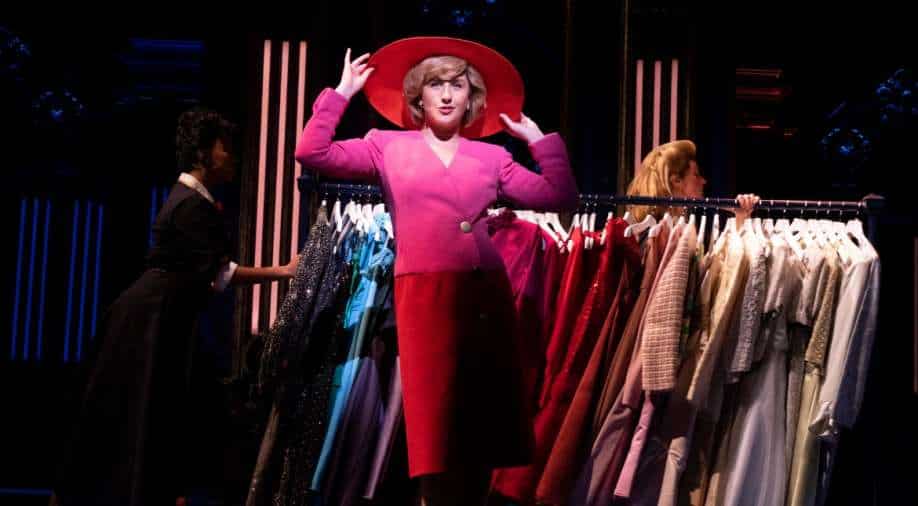 A still from the show Photograph:( The New York Times )

The real problem is intrinsic, arising from the choice to tell the story in song at all. Musicals, like laws, are often compared to sausages: You don’t want to know what goes into them.

Sung by a pack of slithering paparazzi amid an explosion of flashbulbs, so begins “Diana, the Musical,” which seems to exist to answer the question. Digging deep into the celebrity-bio-musical barrel, there to squabble for preeminence with pop divas and Jersey boys, it may well win the prize as the tawdriest and least excusable wholesaling of a supposedly true story ever to belt its way to Broadway.

I doubt that was the intention behind the show, which opened on Wednesday at the Longacre Theater after somehow surviving two disasters: the pandemic, which knocked it down in March 2020; and a filmed version for Netflix (“the year’s most hysterically awful hate-watch,” wrote The Guardian) that did much the same thing earlier this fall. Still, it’s worth asking, as the poor woman’s corpse is forced to rise again, what its authors could possibly have been thinking.

The cynical answer, as always, is money. The Princess of Wales, in her short life and long death, has been dragooned into any number of commercial entertainments, including memoirs by her household staff, thinly sourced biographies, a multi-season story line on “The Crown” and, most recently, the movie “Spencer.” Whether middlebrow or low, these works reshape Diana to their own needs, borrowing her familiar, eventful yet unknowable story to sell mere gossip as relatable real-life tragedy.

But at least none of those involved any of the following, as “Diana” counterfactually does: the title character getting jiggy with Mstislav Rostropovich to an electrified version of Bach’s first cello suite; Barbara Cartland, the romance novelist, lasciviously pawing Diana’s lover James Hewitt as he arrives half-naked on a horse; a man with AIDS consenting to have his photo taken with the princess by singing, “I may be unwell, but I’m handsome as hell”; and a sort of boxing match between the rivals for Prince Charles’ affections set to the words: “It’s the thrilla in Manila but with Diana and Camilla!”

I wish propriety would allow me to tell you as well about the song in which Diana and her butler, Paul Burrell, choose the low-cut, off-the-shoulder “revenge” dress she wears in response to Charles’ 1994 interview blaming the failure of their marriage on her. Only for turning a common vulgarity into an uncommon one could the number be regarded as clever.

Yet these are merely the most extractable of the horrors that “Diana,” as directed by Christopher Ashley, has on display. The real problem is intrinsic, arising from the choice to tell the story in song at all. Musicals, like laws, are often compared to sausages: You don’t want to know what goes into them. In this case, you don’t want to know what comes out, either; if you care about Diana as a human being, or dignity as a concept, you will find this treatment of her life both aesthetically and morally mortifying.

Granted, the authors did not make it easy on themselves. In choosing to cover the entire arc of her fame — from 1980 to ’96, with an epilogue about her death tacked on — they probably doomed themselves to the narrative scrawniness that makes the show so twitchy. (“Spencer” limits itself to three days in 1991.)

Roughly, and I do mean roughly, Joe DiPietro’s book touches on Diana’s rise from meek kindergarten helper to surprise candidate for what one song calls “the worst job in England,” to fairy-tale bride, to scorned wife, to doting mother, to England’s favorite royal, to unfaithful wretch, to carousing divorcée, to martyrdom and points beyond.

Once you add songs into the mix — and Diana (Jeanna de Waal) sings in 17 of them — there’s no time for coherence, let alone subtlety. De Waal is left to embody each new incarnation of the character as quickly and superficially as she swaps William Ivey Long’s trick costumes, which could tell the story better on their own. They are, at any rate, wittier and sparklier than the score; with music by David Bryan of Bon Jovi, and lyrics by Bryan and DiPietro, the songs are cold and crass — and so, not surprisingly, their Diana is, too.

This is not just a matter of de Waal’s bravura yet resolutely unthrilling performance, but also of the framing. In her introductory number, looking back on her life from some point presumably after the divorce but before her death, Diana suggests that it was tactically valuable to be “underestimated” — a word that doesn’t scan as a lyric no matter how mercilessly the songwriters flog it. It doesn’t scan as an idea either; rather, it sets up Diana as a kind of English Evita, a schemer who triumphed, which is bizarre on both counts.

Indeed, there is something seriously wrong with a Diana story whose most believable and sympathetic character is Camilla Parker Bowles. But other than the degrading “thrilla” scene, Camilla is mercifully underwritten, allowing Erin Davie room to find something human in her that the real Camilla never could.
The other two central players have no such room. Roe Hartrampf’s Charles is basically a Prince of Wails, complaining bitterly and at the top of his voice for the entire show; Judy Kaye’s already one-note battleship of a performance as Queen Elizabeth II is further undercut by her popping up occasionally as Cartland — Diana’s step-grandmother — for supposed comic relief.

Choices like these suggest that the authors simply did not know what tone to take and so took every one they could think of. Wanting us to engage with the story seriously, they nevertheless ham it up with randy grannies and cheesy catfights. Seeking to cover 16 years in little more than two hours, they condense or flat-out fictionalize with a wink. In this context, it counts as a kind of discretion that the portrait of Burrell as a trusted confidant (and dress wrangler) neglects to mention that he was later prosecuted for stealing from the princess’s estate — a case hastily dropped after the queen interceded — and, for an encore, wrote a tacky bestselling memoir.

Ashley’s staging follows suit, going for grandeur but, in its haste, reaching only the clamminess of farce. (The chilly sets are by David Zinn.) And in Kelly Devine’s bizarrely noncontextual choreography, the ensemble — whether representing palace flunkies, Knightsbridge snobs or worshipful Dianaphiles — performs the same frenzied gymnastics.

Musicals are difficult and expensive. No one says they have to be serious, too. “The Cher Show” and “Jersey Boys,” among many others, would have been much better with less drummed-up significance. Nor will an insufficiency of craft and proportion necessarily sully a modest, invented tale like the one told in “Memphis,” the 2010 Tony Award winner from the “Diana” creative team.

But if you decide to write a musical about a real woman, known worldwide, who died tragically while still a young mother, something more rigorous is demanded. “Diana,” though, is lazy and thus neither entertaining nor insightful. Although audiences talk back to it at will, it’s not even campy fun. It’s just exploitative, doing to the Princess of Wales pretty much what the tabloid press — let alone the monarchy — did to her in the first place.