It's official! Priyanka Chopra and Nick Jonas look like a million bucks at their 'roka' ceremony 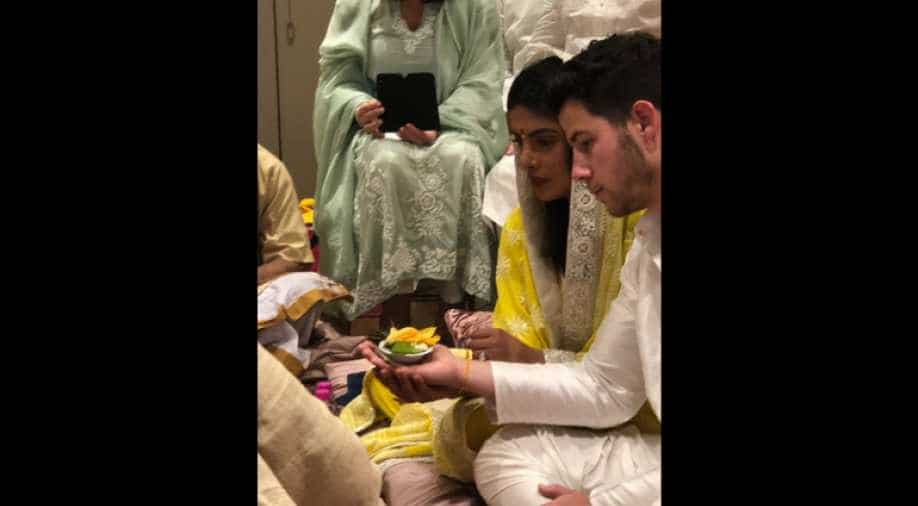 Seems like Bollywood actress and singer Nick Jonas have made their relationship official as the two had their roka ceremony at Chopra's residence in Juhu on Saturday morning. The couple is also set to host a lavish engagement party later in the evening at the residence.

The star went for a yellow suit while Jonas wore an ivory kurta-pyjama. Sister Parineeti Chopra was also seen at the ceremony wearing a traditional yellow outfit.

The ceremony saw a number of guests including filmmaker Srishti Behl Arya and Arpita Khan Sharma. Everyone was also given a box full of goodies which were of classic white and gold theme. Soon after the ceremony, Priyanka and Nick took to Instagram to post a photo of themselves. The photo has the couple looking deep into each other's eyes, confirming their 'taken' status.

Priyanka captioned the image as, " Taken.. With all my heart and soul.. (sic)"

Taken.. With all my heart and soul..

It’s said that when Priyanka and Nick tie the knot in October, it will be a desi wedding for them, according to Indian traditions and customs.

Also see: Look at the rock! Is that Priyanka Chopra's engagement ring?

News of the engagement party started going around when Priyanka’s house was seen getting decked up with lights and flowers. In several videos trending on social media, people can be seen dolling her Mumbai residence for something special. The American singer, 25, was spotted arriving at the Mumbai airport on Thursday evening with mother Denise and father Kevin Jonas Sr.

They were received by the 36-year-old actress at the Chhatrapati Shivaji International Airport. They soon after went for an intimate dinner at JW Marriot in Juhu.

The pop star apparently popped the question on Priyanka's birthday in London. Nick reportedly closed down a Tiffany & Co. store to buy the ring.

Earlier, in two instances, Priyanka was seen hiding her ring from the paparazzi.

This is Nick’s second visit to India, as he first attended Mukesh Ambani’s son’s post-engagement bash in Mumbai with Priyanka.