In pics: Sonam Kapoor's look from her next 'The Zoya Factor' 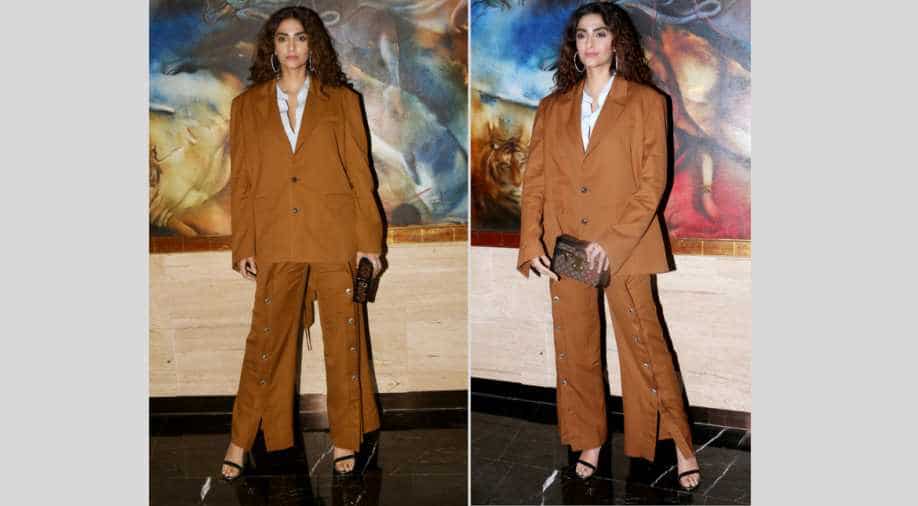 Sonam Kapoor has started prepping for her next film ‘The Zoya Factor’, remember we told you how she hid her hair transformation as she was spotted exiting a salon last weekend in Mumbai. Well, the look is out now.

Appearing at the 3rd edition of the JIO MAMI festival in Mumbai, Sonam came decked in an oversized pantsuit and those perms! She let her hair loose on her shoulders as she sported the curls with so much elan that you’d want to get them done on your hair.

She wore mustard-brown coloured pantsuit that stood out from the rest of the celebrities. She accentuated her look with hoop earrings and minimal natural dewy makeup. She was styled by sister Rhea Kapoor. While some liked or hated the dress, Sonam’s husband Anand Ahuja played with her on Instagram and asked Rhea if he could borrow the suit as he could totally fit into it. He wrote:

She sported a mustard coloured Y/Project pantsuit. Hoop earrings and fresh-faced makeup accentuated Sonam’s look. Sonam was styled by sister Rhea Kapoor. “@rheakapoor can I borrow these after Sonam’s done. Can use them at my next b-ball game also! #multipurpose BAWSE”. Not only Anand Ahuja, Sonam’s father Anil Kapoor also commented, “Love the look”. ‘The Zoya Factor’ is based on Anuja Chauhan’s book about a Rajput girl, Zoya Singh Solanki who falls in love with Indian cricket team captain. Dulquer Salmaan will be playing the role of the Indian team captain in the film. She becomes the lucky charm for the team in 2010 Cricket World Cup.