How Shah Rukh and Aamir Khan celebrated Eid this year 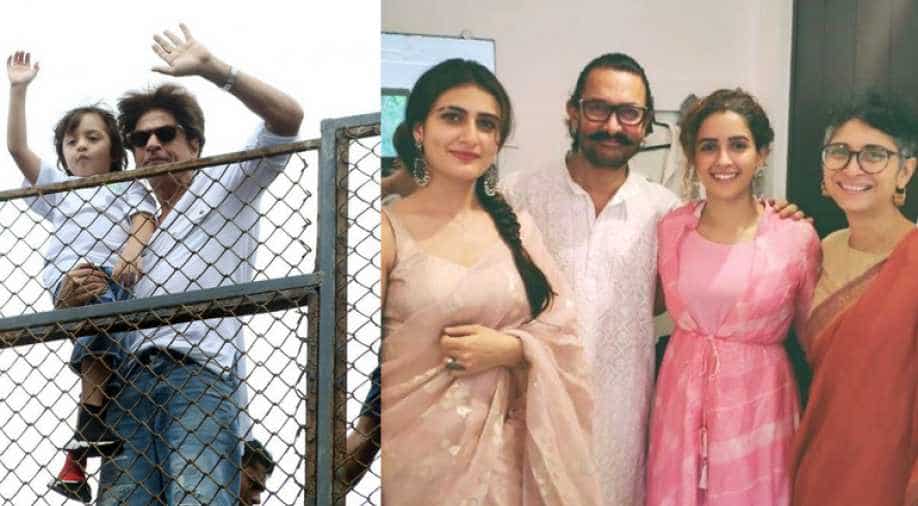 Aamir Khan hosted a lunch for his family and friends on Eid while SRK was seen greeting his fans along with son AbRam. Photograph:( WION Web Team )

It has almost become a ritual now. On Eid, fans gather outside Shah Rukh Khan's bungalow and the star each year obliges his fans by coming out and waving at his fans. Wednesday was no different as thousands of people gathered outside Mannat and SRK along with his youngest son AbRam waved at the cheering crowd.

Khan, dressed in a white shirt and blue denim came on to the platform on his front porch as he waved at the crowd gathered outside his residence. His 'little man'Abram matched his outfit with his father. SRK later took to Instagram to share photos of the day and wished everyone. "Eid Mubarak to everyone. May Allah bless each and all with health and happiness. Thank u for coming home and making the celebrations every time so special. Love from my whole family to u.(sic)"

Eid Mubarak to everyone. May Allah bless each and all with health and happiness. Thank u for coming home and making the celebrations every time so special. Love from my whole family to u.

Another Khan who is known to celebrate Eid with friends and family is Aamir Khan. The actor hosted a lunch on Eid and it had his 'Dangal'family in attendance. Director of the film Nitesh Tiwari came with his wife, filmmaker Ashwini Iyer Tiwari. Aamir's onscreen daughters, Fatima Sana Shaikh and Sanya Malhotra were also present at the do and shared photos on social media.

Another star who is known to celebrate Eid in a big way is Salman Khan. Just like SRK, fans of Salman gather outside his home, Galaxy Apartments every year as Salman comes out with his family and greets fans. But this year, Salman is not in town. The actor is shooting in Malta for Ali Abbas Zafar's 'Bharat' along with Katrina Kaif.