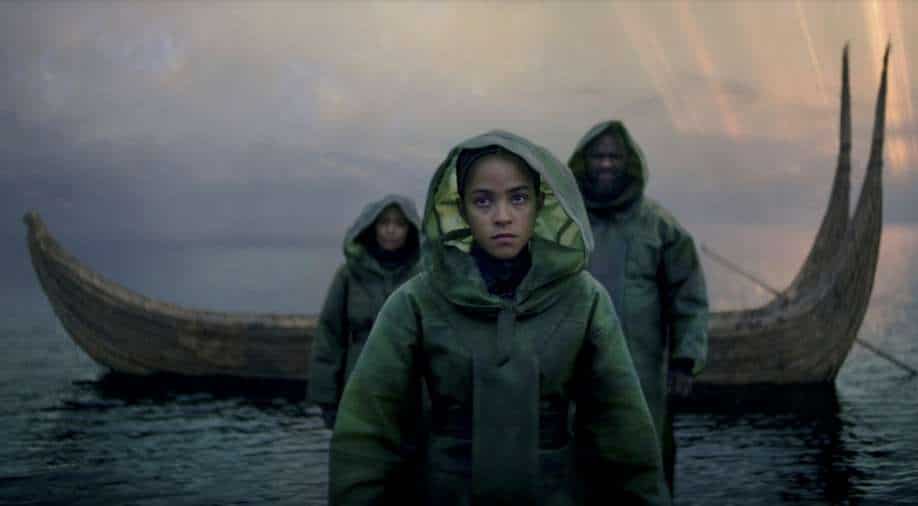 A still from 'Foundation' Photograph:( The New York Times )

“Foundation” is more consistent than “Wolves,” but less magnetic because of its concessions to sci-fi expectations. It could have been better, if only, like Hari Seldon’s disciples, it had faith in the plan.

But in this ambitious, overstuffed epic, that intriguing idea often gets lost in space. Like Trantor, the imperial capital in “Foundation” whose surface is buried beneath human-made layers, the story’s core ends up enveloped in levels upon levels of machinery.

The instigating figure remains the same as in the saga that Asimov began spinning in the 1940s: Hari Seldon (Jared Harris), a “psychohistorian” who purports to be able to predict the future by number-crunching the data on mass populations. (He is the Nate Silver of space.) When his calculations determine that the ruling empire will collapse, the bearer of bad news and his followers are exiled to a planet in the dusty, cheap seats of the galaxy, where they work on a grand plan to shape humanity’s fate and shorten the coming era of chaos.

At a time when “follow the science” has become a political statement, “Foundation” can play like a none-too-subtle commentary. Hari’s protege, Gaal Dornick (Lou Llobell), comes from a world whose leaders condemn scientists as heretics and refuse to acknowledge the rising of the oceans. And Harris plays the visionary with a doomed-prophet rectitude that recalls his turn as a Soviet scientist in “Chernobyl.”

This echoes the Asimov books’ atom-age belief in the power of reason over superstition. But the “Foundation” showrunner David Goyer is also willing to depart from the source material. Asimov’s galaxy was largely a boys club, for instance, so “Foundation” recasts key roles with women, including Gaal — as close to a central figure as the series has, although she is sidelined in the middle of the season — and Salvor Hardin (Leah Harvey), a leader of the Foundation’s remote colony.

Elsewhere, the series adds or shuffles story elements to create the kind of baroque intrigues viewers are used to from the likes of “Game of Thrones.” The role of the emperor is expanded — to be precise, it is tripled. In the empire’s “genetic dynasty,” Emperor Cleon (conveniently an anagram for “clone”) has been replicated for centuries in three persons: young Brother Dawn, middle-aged Brother Day and elderly Brother Dusk.

Every generation, the eldest member of this living Sphinx riddle is ceremonially (and lethally) retired, a fresh baby emperor is uncorked from the cloning vat, Dawn is promoted to Day and Day to Dusk. (I told you there would be math.)

Lee Pace, sheathed in electric-blue gladiator armor, plays a succession of Brother Days. His matinee-villain hauteur risks ridiculousness — say, when having an underling exploded like Creosote in “Monty Python’s The Meaning of Life” — but he energizes an often-stilted production.

In a way, the genetic dynasty and the Foundation are two solutions to the same dilemma: How do you achieve ambitions that take longer to realize than a human life span? For Cleon, the answer is to live serially. For Hari, it is to craft a plan that will outlive him, in part by creating a quasimessianic myth around himself. (Dealing with mortality is also the project of religion, yet another story thread in the series.)

But this is also the challenge of “Foundation” itself. Its premise and Asimov’s blueprint suggest a story that needs to unfold over centuries, shuffling cast members in and out, focusing more on larger systems of society than on individuals. Serial TV, on the other hand, relies on audiences connecting to specific characters over the long haul.
The cloning device is one way to keep characters around over the ages; there are more spoilery contrivances, too. Other changes Goyer makes serve to translate Asimov’s talky novels of ideas into a pageant of explosions and special effects.

For instance, much of the 10-episode first season gets bogged down in an extended terrorism and revenge story that makes Salvor into an action hero. The thriller sequences — involving an enemy straight out of the Klingon-Dothraki warrior-society school — most resemble what viewers expect from a sci-fi epic. And I found myself increasingly tuning them out the longer “Foundation” went on.

The images are certainly arresting. There are spacecraft with interiors like art installations; alien worlds with beringed and bemooned skyscapes; and some sort of mysterious giant lozenge that floats near the Foundation camp like a portentous piñata, promising to burst open and spill forth plot twists and dei ex machina.

But there are things you can’t digitize: a surprise, a genuine laugh, the breath of creative life. Beneath the gunplay and computer-generated imagery, there’s a much weirder show struggling to get out, about statistics and space popes, decadent clone emperors and millennia-old robots.

OK, there is only one robot, but “Foundation” makes her count. As the undying aide to a long line of emperors, Demerzel (the name will ring a bell for hard-core Asimov fans), Finnish actress Laura Birn gives an eccentric performance that is both disconcertingly mechanical and the most vulnerably human of the series.

This and some of the odder inventions of “Foundation” reminded me stylistically of last year’s “Raised by Wolves,” the HBO Max drama of obsessive android maternal love. It was hardly the best show of 2020, but it was so committed to its passion, so willing to cut open a vein and bleed weird robot milk, that I was held rapt even by its worst moments.

“Foundation” is more consistent than “Wolves,” but less magnetic because of its concessions to sci-fi expectations. It could have been better, if only, like Hari Seldon’s disciples, it had faith in the plan.