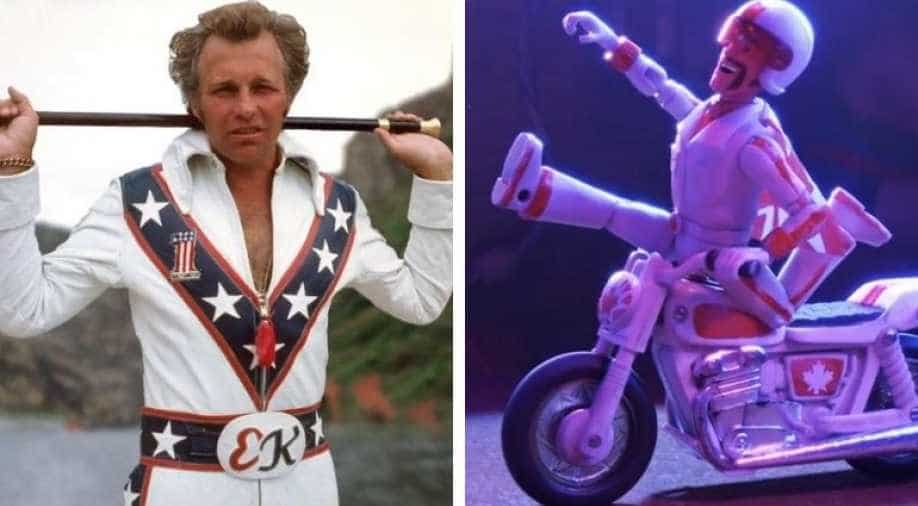 Evel Knievel passed away at the age of 69 in 2007, he was known for doing daredevil motorcycle stunts.

Evel Knievel's family has filed a lawsuit against Walt Disney Company, Pixar.A member of the family has claimed that the 'Toy Story 4' character Duke Caboom is a clear copy of Knievel.

Knievel's oldest son said in a statement, "I don't see a big long line of Disney executives ready to get on a motorcycle and jump 13 buses, nor do I remember any Canadian daredevils from the '70s. While we note that Disney uses their Mickey Mouse lawyers to aggressively protect Disney intellectual property, they did not seek permission to use Evel Knievel at any time."

The lawsuit also shows a picture of Knievel,  with the character, and notes that the two wear similar outfits. It further cites the existence of an 'Evel Knievel Stunt Cycle' toy released in 1973 and a 'Duke Caboom Stunt Cycle' in the 2019 film.

As per the Disney's promotional copy, Duke Caboom was a 1970's toy based on Canada's greatest stuntman, who wore a white jumpsuit with red accents while performing tricks on a motorbike.The character was voiced by Keanu Reeves in the hit 2019 animated film.

“The claims are without merit and we intend to defend against them vigorously in court,” a spokesperson for The Walt Disney Company told news agency. Evel Knievel passed away at the age of 69 in 2007, he was known for doing daredevil motorcycle stunts.