Dakota Johnson on production of 'Fifty Shades' films: 'It was like mayhem...' 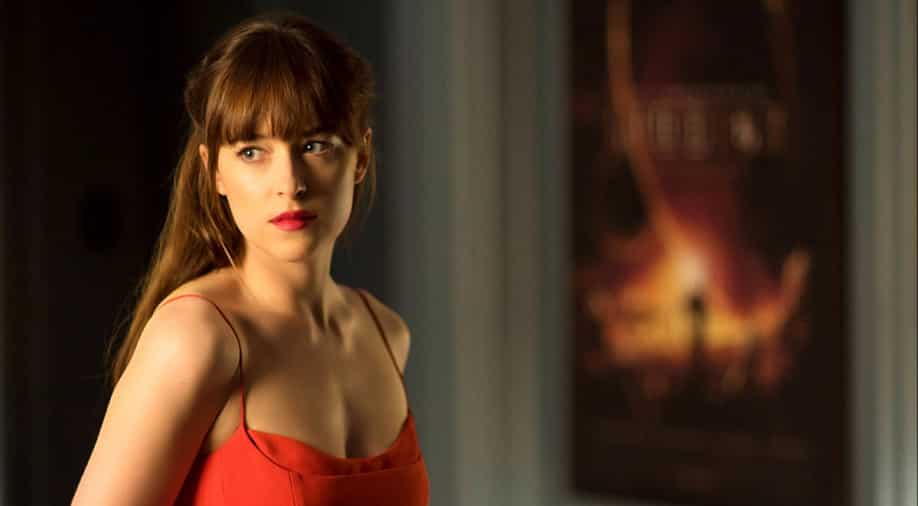 Dakota Johnson will next be seen in 'Persuasion'. Photograph:( Others )

The 'Fifty Shades' trilogy, starring Dakota Johnson and Jamie Dornan, were panned by critics but ended up becoming commercial successes anyway. On a combined budget of $150 million, the film grossed $1.325 billion worldwide. But Johnson, it appears, does not have entirely happy memories of the films.

Dakota Johnson has spoken about her adverse experience of filming the 'Fifty Shades' trilogy of films. The trilogy was based on the book series by British author E. L. James and told the story of a steamy relationship between a young girl Anastasia Steele and businessman Christian Grey.

Also Read: 'Hocus Pocus 2' teaser trailer: The Sanderson Sisters are back with their Halloween classic after 29 years

But Johnson, it appears, does not have entirely happy memories of the films. She took exception to the creative interference by James, the author, herself.

In an interview with Vanity Fair, she revealed, "I signed up to do a very different version of the film we ended up making. [E.L. James] had a lot of creative control, all day, every day, and she just demanded that certain things happen."

Johnson added that she had issues with parts of the books that would not work on the screen, like monologues "which was at times incredibly cheesy. It wouldn’t work to say out loud. It was always a battle. Always. When I auditioned for that movie, I read a monologue from Persona and I was like, "Oh, this is going to be really special." There were a lot of different disagreements. I haven’t been able to talk about this truthfully ever, because you want to promote a movie the right way, and I’m proud of what we made ultimately and everything turns out the way it’s supposed to, but it was tricky. We’d do the takes of the movie that [James] wanted to make, and then we would do the takes of the movie that we wanted to make. The night before, I would rewrite scenes with the old dialogue so I could add a line here and there. It was like mayhem all the time."

On the work front, Johnson will next be seen in 'Persuasion', based on the novel of the same name by Jane Austen. The Carrie Cracknell directorial also stars Cosmo Jarvis, Nikki Amuka-Bird, Richard E. Grant, and Henry Golding. The film will release on July 15, 2022 on Netflix.