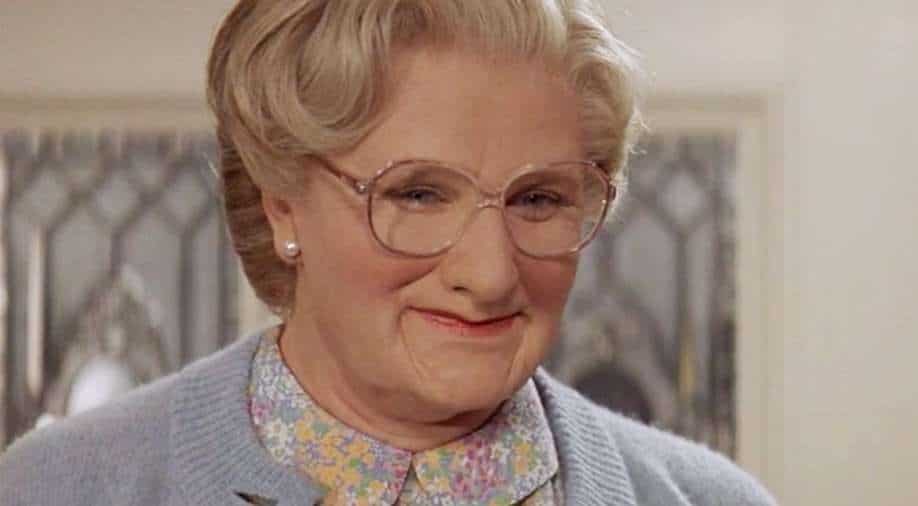 Rob McClure steps into Mrs. Doubtfire’s sensible shoes in this production. He’s vivacious on the stage, and his impressions, including a hilarious tongue-wagging Gollum, are precious.

In 1993, a film about an irresponsible father dressing up as a woman to manipulate his way back into his family’s life was a barrel of laughs. A man in a dress? Classic! He does impressions? Even better! He tries to sabotage his wife’s new relationship? Comedy gold!

Truly, it was a different time.

And that was the main challenge for the stage adaptation of “Mrs. Doubtfire,” a new musical that opened Sunday night at the Stephen Sondheim Theater. With music and lyrics by the brothers Wayne and Karey Kirkpatrick and a book by Karey Kirkpatrick and John O’Farrell, “Mrs. Doubtfire” simultaneously tries to replicate an outdated story and update it for the times. But the show only ends up cowering in the original film’s shadow.

And speaking of shadows, there is the outsize one of the incomparable Robin Williams. In the film, Williams brought his endearing playfulness to the role of Daniel Hillard, a struggling actor who lacks discipline as a father. When Daniel’s wife divorces him and is granted custody of their three children, he poses as the kindly but firm Scottish nanny Euphegenia Doubtfire in order to spend time with his kids.

Rob McClure steps into Mrs. Doubtfire’s sensible shoes in this production. He’s vivacious on the stage, and his impressions, including a hilarious tongue-wagging Gollum, are precious. But director Jerry Zaks’ ambivalent production tries to have it both ways: The story of a playful man-child with whom we empathize but whose good intentions can’t excuse his machinations. The film pulled it off at the time, primarily thanks to Williams’ charms. McClure’s Daniel, though, is more irritating than entertaining, and his antics — which include hacking into his wife’s email account to sabotage her nanny search — are more creepy than kooky.

But would Williams have fared much better in 2021, when the toxicity of this male character’s actions would raise alarms?

That strain is everywhere in this production, whose 18-month pandemic hiatus coincided with renewed conversations about race, gender and equity.

When Daniel asks his gay brother Frank (an amiable Brad Oscar) and brother-in-law Andre (a stylish J. Harrison Ghee) to latex-silicone-and-powder him into womanhood (the impressive makeup and prosthetics design is by Tommy Kurzman), they casually support what seems to be Daniel’s new interest in drag — until they hear his true intentions.

Frank and Andre — who get a paper-thin story line about adopting a child, by the way — are very loosely meant to serve as the gay conscience of a decidedly hetero production. So they go along with the scheme, occasionally popping in for some comic relief. In one number, they also get a personal ensemble of male stylists snapping and flicking their wrists, because even the show’s gay stereotypes are dull.

Lines from the movie about Mrs. Doubtfire having a penis have been excised, and in a surface-level attempt to make Daniel’s long-suffering wife, Miranda (Jenn Gambatese), a more feminist and sympathetic figure, the show’s creators have made her the owner of a body-positive activewear line called “M Body.” The pseudo-feminist song that she sings during a fashion show, “Shape of Things to Come,” is a painfully punny inspirational poster masquerading as a piece of music.

O’Farrell and the Kirkpatrick brothers, whose previous Broadway outing was the 2015 musical “Something Rotten!,” generate a smattering of laughs with the original material, like Frank’s quirk of shouting whenever he lies, and the second half of Daniel’s makeover song, when the list of fashion inspirations for a matronly Scottish nanny change from the glamorous Jackie O. and Princess Di to the more practical Margaret Thatcher and Julia Child. And a chorus of singing and dancing internet chefs, there via the magic of a tablet to help Mrs. Doubtfire cook dinner, is hilariously interrupted by an ad for IBS. Yet the scenes that draw the biggest laughs here are still the ones that are almost identical to the ones in the film.

The musical is stuffed with unnecessary additions, mostly in the form of several awkwardly incorporated or homiletic songs. Mrs. Doubtfire’s iconic vacuum dance scene is done not to Aerosmith’s perfect “Dude (Looks Like a Lady)” but with the decidedly less catchy original song “Rockin’ Now.”

Many of the songs are used to shoulder heavy-handed emotional exposition, and when taken together they offer an odd hodgepodge of musical styles. The eldest child, Lydia (Analise Scarpaci, who serves as the audience’s perspective on the Hillard marriage), leads the kids in the rebellious rock song “What the Hell.” Then there’s a sprinkling of flamenco at a Spanish restaurant; the disco-inspired “Make Me a Woman”; the jazzy “Easy Peasy,” with a lively ensemble tap number (the choreography is by Lorin Latarro); and “Playing With Fire,” a rock song with a volcanic, if random, performance by Daniel’s court liaison, Wanda (Charity Angél Dawson).

David Korins’ clean but generic set is composed of large movable pieces that convey each location: the Hillards’ lilac-walled San Francisco house, a courtroom, a 3D graphic skyline with a lit up Golden Gate Bridge, a stencil overlay of a block of Victorian houses with the hairpin turns of Lombard Street in the background. It’s functional, but a missed opportunity to give the production some added character to further distinguish itself from the original film.

While the “Mrs. Doubtfire” movie may now be — understandably — considered transphobic, it is funny and likable and, most important, confident in what it is. Its musical counterpart feels unsure of what notes to hit, what jokes to rewrite and what updates to add to be relevant. The production wants the audience to both like and be skeptical of its straight male protagonist, and it includes gay characters but doesn’t fully embrace them. A man in drag? C’mon, it’s 2021. That’s just another night in the city.