‘Morbius’ review: The other Bat, Man 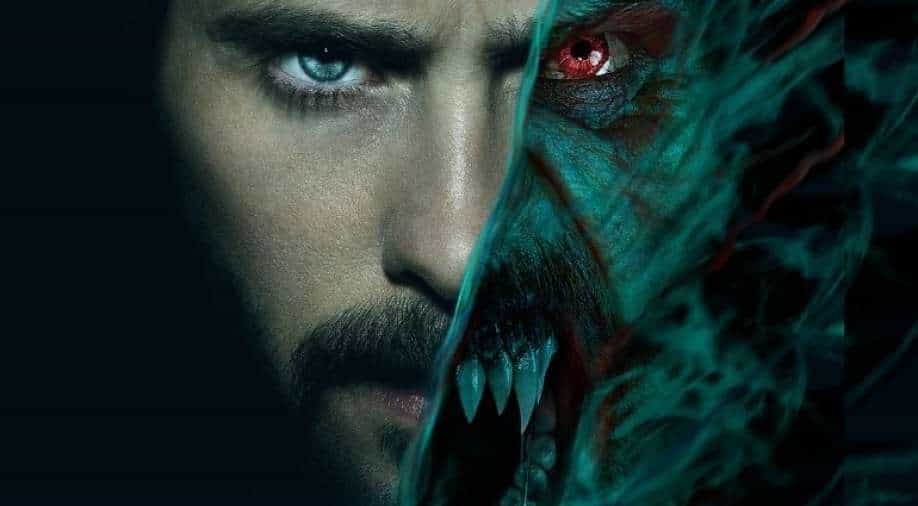 One of the revelations of “Morbius” — the latest movie to take a marginal Marvel character out of mothballs for his blockbuster close-up — is that regular blood smoothies do wonders for the skin.

My, what sharp teeth he has — and what lovely skin, too. One of the revelations of “Morbius” — the latest movie to take a marginal Marvel character out of mothballs for his blockbuster close-up — is that regular blood smoothies do wonders for the skin. To judge by the chiseled planes of Morbius’ arms and torso, pounding shots of the slurpy stuff also builds muscles much faster than mainlining anabolic steroids can.

Still, the bigger surprise about “Morbius” is that it doesn’t suck, at least as a movie. Against the odds and despite the insufferable persona that its star Jared Leto has cultivated, it provides all you want from a diversion about a brilliant scientist with bottomless financial resources (as well as a hot but smart assistant) who, after refusing his Nobel for his genius scientific invention, secretly develops a serum that turns him into a batlike creature with razor nails, great powers and a hunger for human blood. It also runs under two hours, i.e., a full hour less than that recent slugfest “The Batman.” I mean, what’s not to like?

As usual, it opens with some temporal scrambling in present-day Costa Rica, where the adult Morbius (Leto) swoops in on a helicopter, a darkly romantic vision with a curtain of jet-black hair, billowing clothes and hired guns. There, he embarks on a close encounter with vampire bats, as one does when swimming with dolphins has become too pedestrian. Slicing open his palm, he draws first blood and is inundated by a cloud of bats. After a leisurely flashback to his sad childhood, Morbius is back in his New York lab, experimenting and knitting brows alongside a colleague, Monica (Adria Arjona).

Like “The Batman,” “Morbius” is a classic American tale of personal trauma, existential agony, regenerative violence ... and bats. Once again, the trauma reaches to childhood, although in this case it involves the young Michael Morbius being treated in a Greek children’s hospital for a rare blood disease. (Why Greece? I have no idea.) There he had a sympathetic doctor (Jared Harris) and befriends a boy he calls Milo, who has the same disease. Milo grows up to become a louche moneybags played by Matt Smith, who’s best known for playing Prince Philip in “The Crown,” a bit of casting history that gives his role here amusing tang.

The movie’s first half is better shaped than its second, and there are narrative lacunae here and there that suggest some late-breaking editing busywork. Even so, as a neo-vampiric tale of dread and desire, the entire thing more or less makes sense on its own improbable terms. The characters are similarly coherent, not just sketches that are designated to be filled out in successive franchise chapters. This modulation also extends to the visuals, despite the overall Goth gloom; here, lights are actually turned on, and sometimes the sun even shines, if only to explain that Morbius isn’t your granny’s Dracula.

The filmmakers — Daniel Espinosa directed, from a story and script by Matt Sazama and Burk Sharpless — reference earlier bloodsuckers, tucking in nods to Bram Stoker’s novel and to F.W. Murnau’s silent film “Nosferatu.” But Morbius is a hybrid creation, one that recasts Dracula as a kind of contemporary Dr. Frankenstein figure, if one who, like Peter Parker, is transformed by his encounter with another species. Once Morbius goes batty, everything becomes increasingly more complicated and violent, and while bodies fall en masse and one character revels in carnage, the movie doesn’t get off too gleefully on its mayhem.

Like Leto’s performance, Espinosa’s directing settles into a moody middle ground that’s neither too jokey nor overly self-serious, one reason that the movie may appeal more to civilians than to comic book fundamentalists. It isn’t shrouded in reverence and, in contrast to some other industrial productions of its ilk, you don’t need a Talmudic scholar’s familiarity with the source material to go with the flow. Perhaps as a consequence, it plays more like a movie than an introductory installment. It may well remain a stand-alone given the negative early word and the uncharacteristically muted reaction of the audience I saw it with.

Leto’s history of needless showboating (as in that wreck “House of Gucci”) may not have boded well, but he fits the role and delivers an actual performance, not just shtick and brooding poses. His dramatic physicality — his body fluctuates between the skeletal and the pumping-iron robust — read as more vainglorious than strictly necessary. But the rest of the performance dovetails with the movie, tonally and otherwise. Greasy or glammed, Leto fills in Morbius with restraint, sensitivity and gestural expressivity, creating a solid enough emotional foundation that deepens the character’s struggles with his own monstrosity.

That isn’t to oversell “Morbius.” Its virtues are minor, even if they are a relief. The movie doesn’t have the visual wit and playfulness of the first “Doctor Strange,” and it’s nowhere as fun as the original “Guardians of the Galaxy,” which had a lightness of touch that’s almost entirely missing from the contemporary comic book movie. “Morbius” is a ghoulish, suitably downbeat tale of madness, hubris, suffering and weird science set in a world that offers little solace. And while most of it is as predictably familiar as expected, it does something unusual for a movie like this: It entertains you rather than bludgeons you into submission.