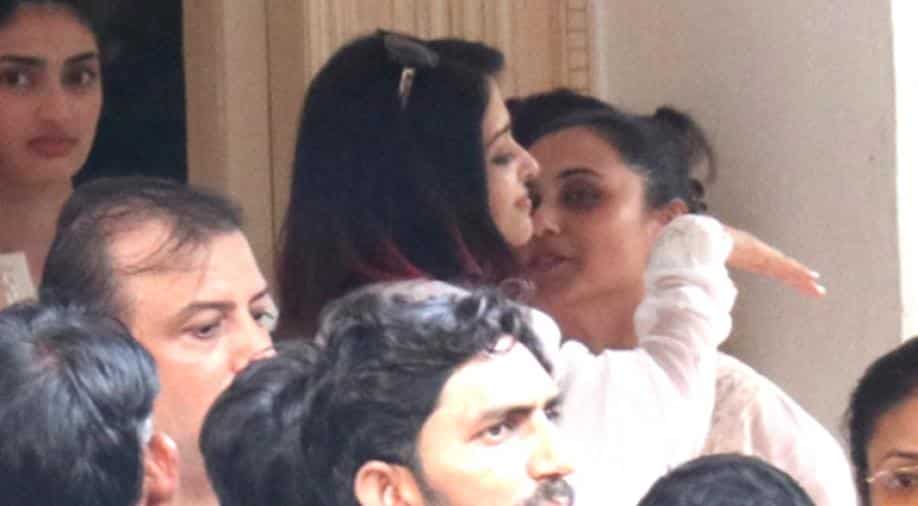 All's well between the former friends-turned-rivals, it seems.

Almost the entire Bollywood was at Raj Kapoor's residence on Monday to pay their last respect to Krishna Raj Kapoor. The matriarch of the Kapoor family died in the early hours of Monday and brought the entire Kapoor family together under one roof as they bid an emotional farewell to her.

They say grief can make people come together and that's exactly what happened on Monday. Rivals, former flames all united to mourn the death of one of their own. What caught everyone's attention was a warm hug that actresses Aishwarya Rai Bachchan and Rani Mukerji shared.

Aishwarya visited the Kapoor residence with her mother and while leaving the venue, cameras caught Ash chatting up with Alia Bhatt, Karan Johar, Athiya Shetty and Rani Mukerji. For those coming in late, the two actresses were known to be close friends but their relationship soured after Ash was replaced by Rani in SRK's 'Chalte Chalte'.  Aishwarya was at that point of time dating Salman Khan and had Khan used to regularly interrupt the film's shooting by dropping in to meet his then-girlfriend. SRK, who was the leading man and the producer, had to eventually replace Ash. Reportedly, Rani's entry did not go down well with Ash.

There were also rumours that Rani even once dated Abhishek Bachchan before he dated and eventually married Aishwarya. None of them ever confirmed or denied the news. However, on Monday, as the two actresses hugged it out, it seems that the two have moved past their differences once and for all.