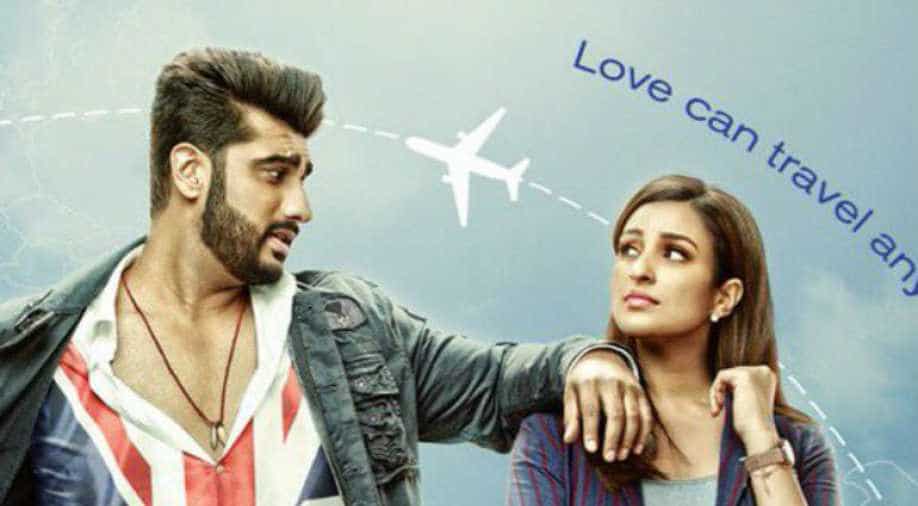 Arjun Kapoor and Parineeti Chopra in a poster of 'Namaste England' Photograph:( Twitter )

Arjun Kapoor and Parineeti Chopra starrer 'Namaste England' has landed itself in trouble. The lead pair unveiled the posters of the film on Tuesday but Internet wasn't too happy as one of the posters had a distorted version of the Indian map.

The poster featuring Arjun and Parineeti had the Indian map but had cut off the Aksai Chin region of Jammu and Kashmir from the map itself.

Needless to say, Twitter was the first to point out the mistake.

Looks like makers of Namaste England are planning for a China release and so cut off the Aksai Chin region from India map to not offend Chinese people. pic.twitter.com/DG3qlEd0Op

Poster of namaste England is released and they have excluded half kashmir from indian map
What a shame@arjunk26 @ParineetiChopra pic.twitter.com/SyjXKFGOH9

Recently the poster of "Namaste England" was released.
What I found was really shocking.
Did you notice region of Aksai Chin is not being shown as Indian Territory? It is intentionally hidden from the map of India in this poster.@RelianceEnt @arjunk26 @ParineetiChopra #shameOnU pic.twitter.com/loqfJqGvT0

While there was no official statement made by the makers on the matter they later seem to have corrected the poster as both Arjun and Parineeti shared a new version of the poster which had the correct version of the Indian map.

According to the Indian laws, misrepresentation of the India map is a violation of the National Map policy. The misinterpretation of the map is also a criminal offence which can lead to jail term or payment of fine or both.

The Aksai Chin region has been under dispute between both India and China since the 1962 war.