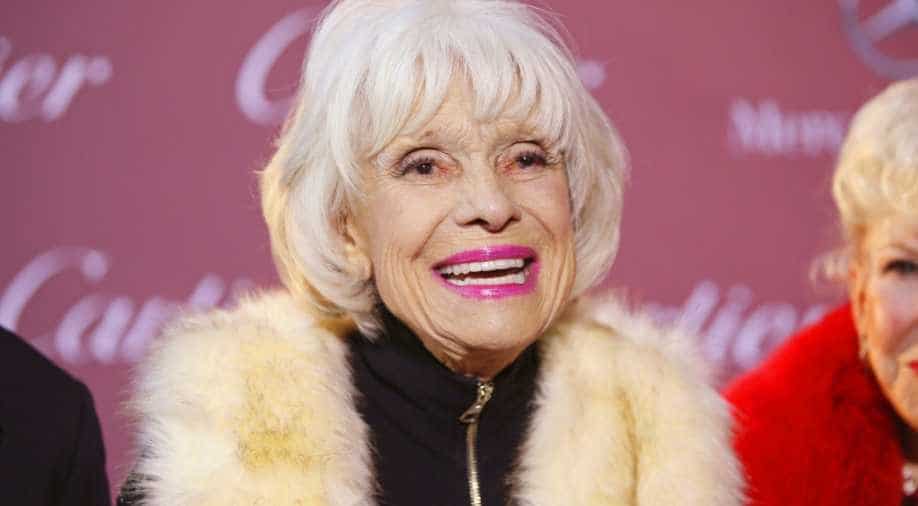 Carol Channing, who won over audiences with her giddy, guileless charm in signature roles in Broadway's 'Hello, Dolly!' and 'Gentlemen Prefer Blondes,' died in her California home on Tuesday at the age of 97, according to her publicist.

In a career that spanned seven decades, the saucer-eyed, raspy-voiced musical-comedy star never shook her association with the role of matchmaker Dolly Levi in the 1964 musical 'Hello Dolly!' or gold digger Lorelei Lee in Anita Loos' 'Gentlemen Prefer Blondes.'

Still, Channing embraced being identified with Lorelei, as well as Dolly, a role that won her a Tony Award.

"Audiences expect and demand I sing these songs," she once told a reporter of her signature tunes, 'Diamonds Are a Girl's Best Friend' and 'Hello Dolly.' "I'm lucky to be so closely associated with both 'Diamonds' and 'Dolly.' ... I'm luckier than most - I have two identity songs."

Channing played each role for years on Broadway and on tours around the world, taking the stage as Dolly more than 3,000 times. As recently as 1996, at age 75, she returned to Broadway following a national and world tour of "Dolly."

"One of Broadway's greatest lights, Carol Channing, has passed on," wrote 'Star Trek' actor George Takei on Twitter. "She rejoins the heavens as a new diamond in the night sky, and as she famously sang, they are a girl's best friend."

Channing was born in Seattle on Jan. 31, 1921, and got her first taste of the theatrical life as a small child at public speaking engagements of her father, a journalist.

After a brief time at Bennington College, Channing had small parts in 'No, No, Nanette' and a Broadway failure called 'I'm Simply Fraught About You,' and also did a small revue.

She worked at resorts in the Catskill Mountains in New York and at Macy's department store before landing the role of the fortune-hunting Lorelei Lee in the 1949 musical 'Gentlemen Prefer Blondes.' She was an unlikely choice for the role.

In 1964, Channing found a role equal to Lorelei Lee in Jerry Herman's 'Hello Dolly,' which became a Broadway classic.

She saw both of her signature stage roles go to younger Hollywood actresses when film versions of the plays were made. Marilyn Monroe played Lorelei Lee and Barbara Streisand had the title role in the 1969 film "Hello Dolly," a colossal flop often blamed for ending the classic era of Hollywood musicals.

Channing won an Emmy and several nominations for television variety specials but her film career was sporadic at best, although she received an Oscar nomination and a Golden Globe for her part in the Julie Andrews musical 'Thoroughly Modern Millie' in 1967.

In 1968, she was given a Tony special award and in 1995, accepted a Tony for lifetime achievement.

The star and her second husband, Canadian football player Alexander Carson, had a son, Channing, who is a newspaper cartoonist.

She married her third husband, producer-writer Charles Lowe, in 1956, and he guided her career for 40 years. The couple separated in 1997 and she accused Lowe of emotional abuse and mishandling her finances, leaving her practically broke. Channing said the couple's marriage was a sham, with only two sexual encounters in 40 years, leading Lowe to countersue for defamation. He died in September 1999.

In 2003, Channing married her junior high school sweetheart, Harry Kullijian, a California developer, who contacted Channing after learning that she had written fondly about him in her autobiography. He died in 2011.

She was still taking the stage in her 90s with a 2014 show to talk about her career.