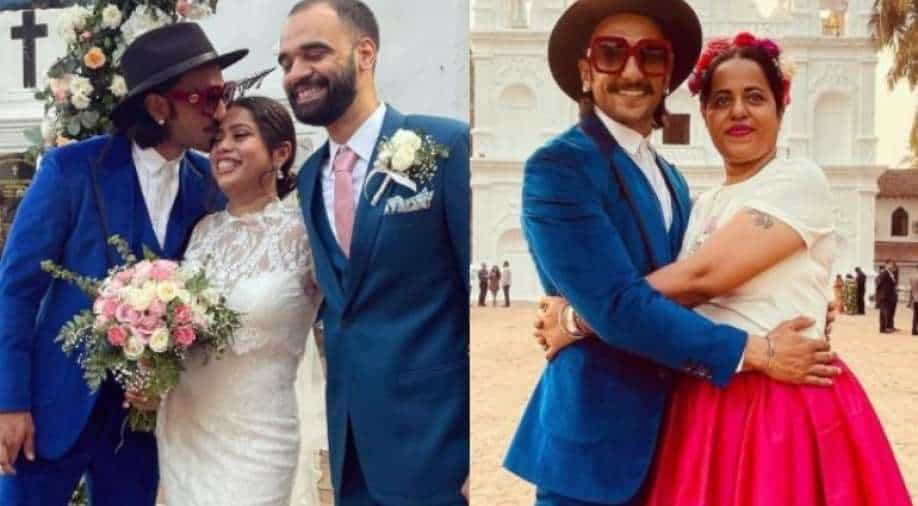 Ranveer Singh was part of the Christian wedding that took place at St. Alex Church in Calangute and was looking dapper in a blue suit.

Ranveer Singh has been busy promoting his sports drama '83', even though, he took some time off to attend his manager Susan Rodrigues' wedding.  Singh, who was in Dubai for the movie's promotion jetted off to Goa to attend Susan’s wedding.

Singh was the part of the Christian wedding that took place at St. Alex Church in Calangute and was looking dapper in a blue suit. For the special day, Ranveer was wearing a vintage style velvet three-piece suit, that included bell-bottoms, and paired it with a hat.

Greatest win of Indian cricket: This is why I want to watch '83'

Ranveer's stylist Nitasha Gaurav shared some happy pictures from the ceremony. One picture shows Ranveer kissing the bride on her forehead as he posed with the newlyweds.

Ranveer and Nitasha also posed together.

On the work front, Ranveer along with his wife, actor Deepika Padukone attended the Red Sea Film festival in Jeddah. The couple were at the festival for the premiere of their new film- sports biopic '83' which is based on the Indian cricket team's historic win at the World Cup in 1983.

The film got a standing ovation at the festival- a video of which has gone viral on Twitter.

Standing ovation and applauds at the end of the movie premier of 83 staring @RanveerOfficial and @deepikapadukone at the Red Sea Film Festival. Kudos to @kabirkhankk and team for the brilliant work. And the man himself Kapil Dev for his performance in 1983 pic.twitter.com/4a4uOSnJE6

Helmed by director Kabir Khan, '83' features Singh as legendary cricketer Kapil Dev while Deepika plays his wife in the film. She is also the co-producer of the film.

After a long delay, the movie will hit the silver screen on December 24 in Hindi, Tamil, Telugu, Kannada, and Malayalam.