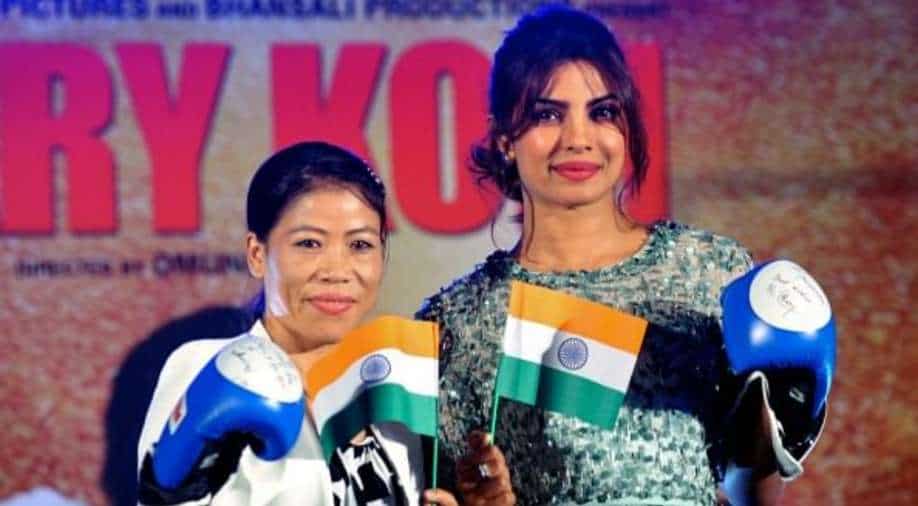 Real meets reel: Mary Kom and Priyanka Chopra at an event around the time the film in question was released Photograph:( Instagram )

Bollywood director Omung Kumar, who has directed the Mary Kom biopic by the same name, has defended the casting of actress Priyanka Chopra in the titular role amid renewed criticism on her playing the role of the celebrated Manipuri athlete.

Amid the ongoing controversy pertaining to casting actors from Northeast India for roles from that part of the region—for the sake of authenticity—filmmaker Omung Kumar has now defended casting Priyanka for the job.

In doing so, Kumar reportedly cited examples of other actors taking on similar roles (that did not abide by the authenticity rules) and claimed that he has 'promoted Manipur the way no one else has'.

“An actor can mould themselves into any character and that’s what Priyanka Chopra did beautifully. That’s why the film was so effective. I have promoted Manipur the way no one else has, and I am proud of it. I gave a lot of Manipuri actors inroads to Bollywood through the film. The film’s reach also has to be considered while casting. We did look at a lot of Northeastern actors for the parts played by Priyanka and Darshan Kumaar too but no one suited the role. People think Darshan, who hails from Haryana, was from Manipur (laughs). So, if they suit the part, an actor can play any role. Amitabh Bachchan played Anthony Gonsalves without being Christian. If there is a South Indian character in the film, there’s no hard and fast rule that states we have to cast a South Indian actor only in the role,” Kumar reportedly told an Indian daily.

This renewed controversy is based on the recent Olympics triumph of Mirabai Chanu, and comments made by actor Lin Laishram, who had co-starred in ‘Mary Kom’. Both Laishram and Chanu are from Manipur.

Speaking to Free Press Journal, Laishram had reportedly said, “I admire Priyanka for her hard work, she really put in a lot of hours in order to look like Mary Kom but I always felt that casting is an important step in film. I believe in authenticity and inclusivity, so a girl from Manipur or the North East could have been surely cast to represent us...When it comes to playing an achiever from the Northeast a non-North Eastern person is chosen as seen in Mary Kom. On the other hand, why not cast people from Northeast also as normal Indians in all walks of life which we are.”