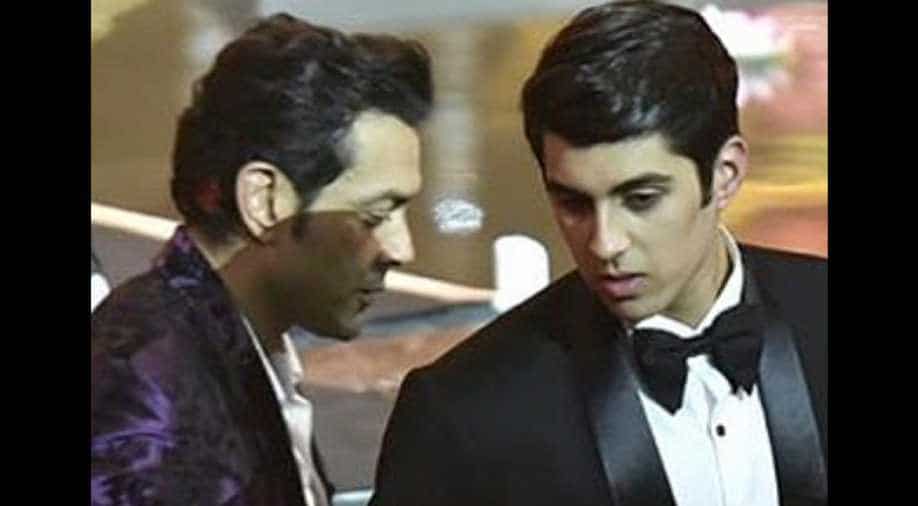 Now that late actress Sridevi’s elder daughter Janhvi Kapoor is set to make her Bollywood debut this year with Dhadak and Saif Ali Khan’s daughter Sara Ali Khan will also show her magic on the big screen with her debut in Kedarnath (hopefully), there was news that maybe Bobby Deol’s son, Aryaman Deol will also head to the Hindi entertainment industry.

Reports started surfacing after Aryaman made a starry appearance at this year’s IIFA festival at Bangkok with papa Bobby Deol and family looking his dapper self.

Suited in chic formals, Aryaman looked ready for the cameras and quite comfortable with the paps. In fact, it looked like Bobby brought him to the festival to get him acquainted with the world of cinema so that his debut can happen with ease. However, quashing all these rumours, Bobby has now come out to speak about his son and his interests.

Father- son duo #BobbyDeol & #AryamanDeol were snapped today at the airport as the family left for London. Bobby Deol, who is running high on the sucess of his last film #Race3, headed to London for the shoot of #Housefull4. The actor is making the most of his time and has combined work with a family holiday. | @iambobbydeol @realbollywoodhungama

Speaking to a Mumbai-based daily, Bobby said, “I’m blessed, he’s a beautiful child, not just from the outside. He has a beautiful soul too. He’s just turned 17 and I don’t want him to grow up before his time. I have kept my kids out of the limelight and away from the media as I want them to enjoy their childhood like I did. They can then choose to do what they want. Right now, Aryaman’s interests are studies and cricket.”

Bobby was last seen with Salman Khan in Race 3 that did good business at the box office. He will next be seen in Housefull 4 and Yamla Pagla Deewana Phir Se.