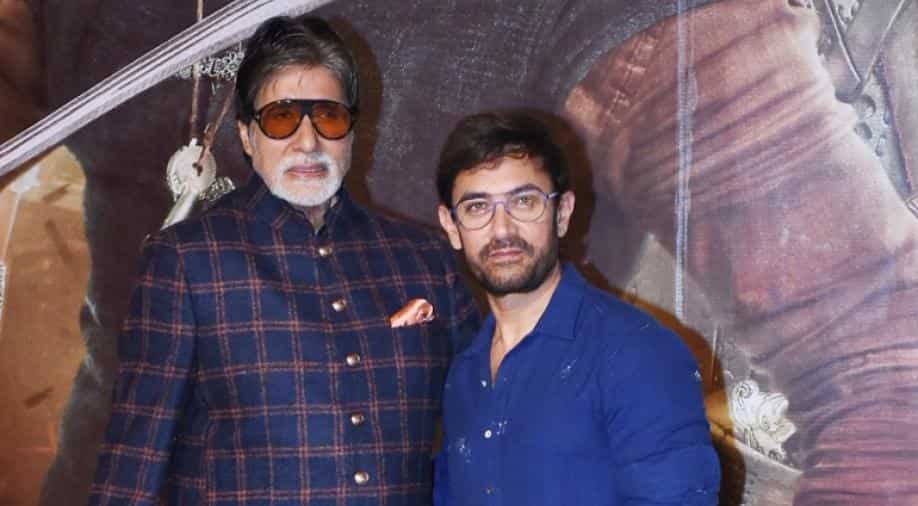 Amitabh Bachchan and Aamir Khan pose for the media during the trailer launch event of 'Thugs Of Hindostan'. (Image by Yogen Shah) Photograph:( WION Web Team )

"My name is not Tanushree and my name is not Nana Patekar," Bachchan said when asked to react to Dutta's recent TV interview.

Tanushree Dutta's recent accusation against Nana Patekar for harassing her on a film set 10 years back has opened a can of worms in Bollywood. But while Dutta has named and shamed the veteran actor, she has also added that how the global #MeToo movement would never happen in India as people choose to turn blind eye to sexual harassment cases in Bollywood.

On, Thursday, at the trailer launch event of 'Thugs Of Hindostan', two of Bollywood's biggest stars- Amitabh Bachchan and Aamir Khan, chose to keep mum about the controversy. Both evaded a direct answer when asked about actor Tanushree Dutta's claim that Nana Patekar harassed her on the sets of a film in 2008, an allegation that is being seen as Bollywood's #MeToo moment.

"My name is not Tanushree and my name is not Nana Patekar," Bachchan said when asked to react to Dutta's recent TV interview.

Neither my name is Tanushree nor Nana Patekar. So, how can I answer your question?: Amitabh Bachchan on Tanushree Dutta accusing Nana Patekar of harassment. #Mumbai pic.twitter.com/kyqSRnhYJf

Khan said it would not be right for him to comment but "whenever something like this does happen it is really a sad thing".

Khan said it would be unfair on his part to comment on the controversy without knowing the "veracity" or the "details" of the matter.

"I don't think I can comment on it... But whenever something like this does happen it is really a sad thing. Now whether such thing has happened it is for people to investigate it," he said.

In a recent TV interview, Dutta said Patekar misbehaved with her on the sets of 'Horn Ok Pleasss' 10 years ago.

The actor, a former Miss India-Universe who is now based in the US, also alleged that Patekar had the tacit support of the film's makers.

Patekar, who had denied the claims at a press conference when Dutta raised the issue in 2008, remained unreachable despite several attempts to contact him for his version of what had happened.

Dutta's allegations have opened a furious debate on sexual harassment in the Hindi film industry with many supporting her but others questioning her motives for raising the issue so many years later.

The actor, who has featured in films such as 'Aashiq Banaya Aapne' and 'Chocolate', said she spoke about the issue earlier and no one had the right to say anything to her.

"They called me a slut, an unprofessional.. When I spoke about it eight to ten years back. Nobody has right to say anything to me," Dutta told a news agency.

Dutta said there is social stigma and character assassination that a woman goes through when she talks or tries to talk about such incidents.

"They made sure that we did not escape from the studio, they locked the gates and then the cops came and they got us out... So when we filed the police report, they filed a counter complaint and because of the counter FIR, my dad, hairdresser and spot boy had to go through so much harassment over the next couple of years," she said.