9 Nonagenarian Personalities we lost in 2016 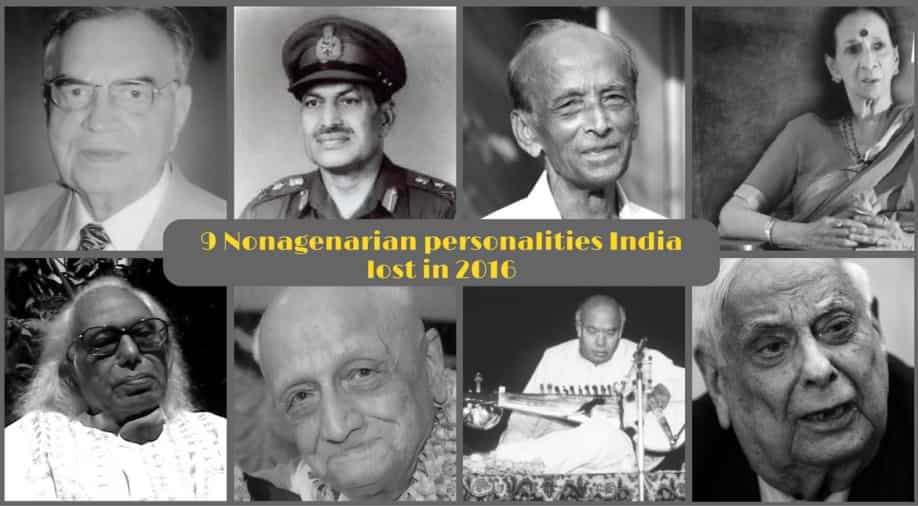 2016 was a year when India lost many nonagenarian personalities from all walks of life, leaving an indelible mark on everyone. Photograph: Others

In addition to this, nonagenarian personalities we have also lost a centenarian this year 107 years old Abdul Rashid Khan. He was an Indian vocalist in Hindustani music who holds numerous awards and recognitions for his contribution in the field of music. Some of his awards are ITC award, Sangeet Academy award, Life Time Achievement Award. He is fondly remembered as a teacher rather than as a performer.

Garudachar was an Indian cricketer who played for several teams in Indian domestic cricket. He was known for his right arm leg spin bowling style.He made appearances in Indian first-class cricket championship and won many matches for the motherland. He was the oldest living Indian cricketer, the legacy of Indian cricket.

Akbar Ali was a famous poet who was awarded an annual literary award. He was the member of the Karnataka Legislative Council. He conquered many hearts with his works which include Nava Chetan, Anna, Sumana Saurabha, Vish Sandhu.

The Indian politician Balram Jahkar was a parliamentarian and the governor of Madhya Pardesh. He did his early education under the guidance of Swamy Keshwanand ji, he was known for his social activities and for his contribution in the field of agriculture.

K.V. Krishna was the former chief of Indian Army and was the governor of Jammu and Kashmir, Nagaland, Manipur and Tripura. He was honored with medals for his outstanding leadership, courage, determination and his bolt drive during the wars. The song for his bravery stays intact in his book and remembrance.

The classical dancer, Mrinalini Sarabhai was born in Kerala, a choreographer, and an instructor; she was the founder of Darpana Academy of performing arts. Her legacy continues through the 18000 students whom she trained in Bharatanatyam and Kathakali. She was awarded the third-highest civilian award in the Republic of India.

A famous botanist, Ananda Chandra Dutta, started his career as a teacher and then joined the Tocklai tea research institute. He prepared a list of 10,000 trees for the Tocklai herbarium and established the tea museum. He was an expert in plant identification and in tea taxonomy.

He taught many to lead a life with purpose and to find its way through passion.

He served as the governor of the states of Goa and Punjab. He has been awarded with many military awards, Commendation of Merit and Friends of Liberation War Honor Award.

A.B. Bardhan served the country as a freedom fighter, a trade union leader and as a former general secretary of the communist party of India (CPI). He started his quest for communism at the age of 15. He is a post graduate degree holder in economics and in law.