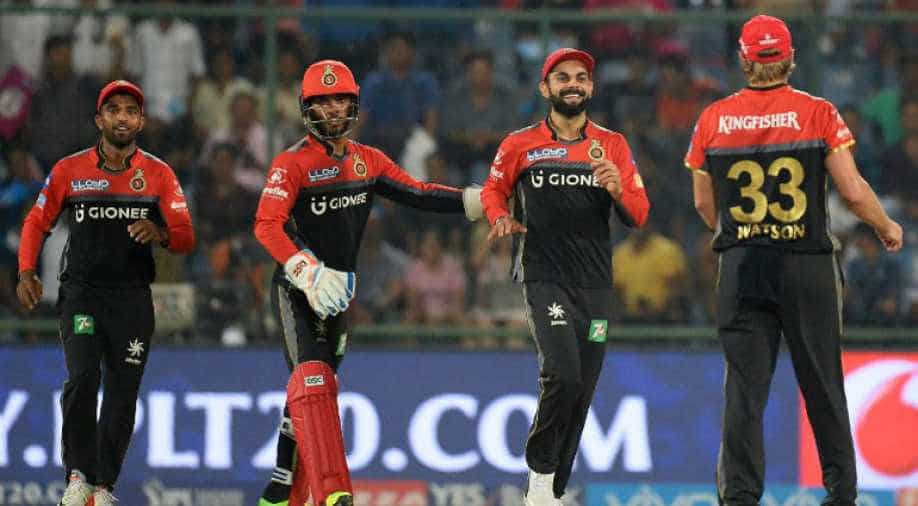 Royal Challengers Bangalore got the better of Delhi Daredevils by 10 runs to end their forgettable campaign in the Indian Premier League 10 on a positive note, here tonight.

Despite the win, RCB finished at the bottom of the table with just seven points from 14 games, while Daredevils were placed sixth with 12 points from as many matches.

The home side needed 13 in the final over after Mohammed Shami slammed debutant pacer Avesh Khan for a six and a four.

But Daredevils could manage only three and were bowled out for 151.

Earlier, skipper Virat Kohli led from the front with a 45-ball 58 to guide RCB to 161 for six.

Opener Chris Gayle made up for his two consecutive ducks with a 38-ball 48 after RCB opted to bat. In the final over, Pawan Negi smashed three successive fours to help the visitors cross the 150-run mark.

Negi was RCB's most successful bowler, finishing with figures of 3/10 in two overs.

Daredevils lost Sanju Samson early, off the innings' second ball, while Karun Nair gave away his wicket after scoring 26 with the help of five boundaries to leave Daredevils at 41 for two in the sixth over.

Samson's wicket was young pacer Avesh's first. It was surprising that RCB opted for the 20-year-old in only their last game of what has been a forgettable season.

Daredevils reached 50 in the eighth over with Shreyas Iyer and Rishabh Pant looking to stage a recovery.

While Iyer chipped Travis Head on the one side for a four, Pant went inside-out and cleared long-off to tally 16 runs off the spinner's over.

In the 12th over, seamer Harshal Patel dealt RCB a double blow when he sent back Iyer and Marlon Samuels off successive deleveries, to give RCB the upper hand and leave Daredevils in trouble at 87 for four.

The hosts reached 100 in the 14th over with Pant looking in good nick. Corey Andesrson was then stumped by Vishnu Vinod off Head, but Pat Cummins blasted the bowler for a six only to get out the next ball.

With 49 needed in four overs, Pant sent Harshal Patel soaring over the square leg boundary for a huge six, but the bowler fought back strongly when he bowled the left-hander to swing the game in his side's favour.

Shami dispatched the last two balls for boundaries to bring the equation down to 35 off 18 balls.

Amit Mishra beautifully played Negi over his head for a six, but was stumped two balls later, as Daredevils required 27 in two overs, which in the end proved to be a tall ask.

Earlieer, having failed to open his account in the last two matches, Gayle started RCB's innings in earnest, clipping Daredevils captain Zaheer Khan off his legs for two boundaries in the first over.

The big-hitting West Indian opener then sliced Shami for a six over the third man region, and if that was not enough, he moved across a little to loft the seamer's slower delivery over deep midwicket for another maximum.

Even as Gayle threatened, Daredevils got the first breakthrough when Cummins rattled Vishnu Vinod's stumps after getting a bottom edge, the bowling change working for the home team.

In came RCB captain Kohli and the Feroz Shah Kotla roared in anticipation.

Gayle drove Shami for a boundary to long-on in the first ball of the sixth over, but the seamer came back well in the following deliveries to keep the left-handed batsman in check.

Cummins bowled a tight seventh over before Kohli broke the shackles by hitting Mishra for a boundary.

It was characteristic Kohli as the Indian captain timed one superbly to send Anderson over long-off for a maximum, bringing the side's fifty in the first ball of the ninth over on a slow pitch.

Languishing at the bottom of the table, RCB were 66 for one at the halfway stage.

Gayle then pulled Mishra over deep midwicket for a massive six, and Kohli did one better by hitting the leg- spinner for a six and a four, giving a much-needed boost to RCB's run rate.

The fifty-run partnership for the second wicket was achieved in 41 balls, thanks to a productive 12th over that fetched 19 runs.

However, Gayle fell two runs short of a half century, as Shahbaz Nadeem had him caught at midwicket for a rather soft dismissal.

Meanwhile, Kohli brought up his fifty -- his fourth of the season -- off 39 balls, but got out soon after he clobbered Zaheer over deep midwicket for his third six in what could be the former India seamer's final IPL game.

Kohli struck three sixes and as many fours, and ditto for Gayle too.

'I will take vaccine and then start flying', Sourav Ganguly to attend India vs England T20 series