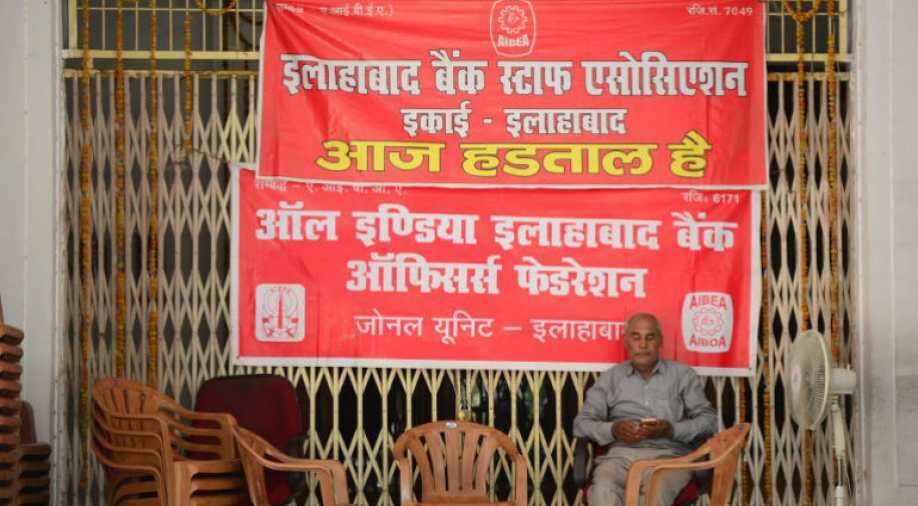 A bank employee sits outside a closed branch during a two-day nationwide strike in Allahabad on May 30. Photograph:( AFP )

Around one million bank employees went on strike across India on Wednesday, a union representative said, demanding better pay and a government crackdown on companies who wilfully default on loan payments.

Some 5,000 workers chanted slogans and waved banners at a protest in the financial capital Mumbai, head of the bank union Devidas Tuljapurkar said, as they claimed they were paying the price for India's mountain of bad debts.

The Asian giant's troubled lenders have some of the highest levels of debt in emerging markets, weighed down by billions of dollars of non-performing assets (NPAs) also known as bad loans.

The two-day strike, which ends on Thursday, led to tens of thousands of branches of public sector and commercial banks downing their shutters, paralysing operations in some parts of the country.

The strikers are unhappy with a proposed two per cent wage rise which they have been offered, noting that it is well below India's inflation rate of around 4.5 per cent.

"Bankers justification in offering the meagre wage rise is losses to the banks," Tuljapurkar, convenor of India's United Forum of Bank Unions, said in a statement.

"(However)... It is big corporates who are attributable for losses to the banks. But for no fault on their part ordinary employees and officers are being denied their due share in profits," he added.

Earlier this year the government said banks' bad loans were worth more than $120 billion.

The government is trying to help state-owned banks clean up their books and in October approved a $32 billion recapitalisation plan for struggling lenders.

It has also given India's central bank greater powers to intervene in cases of bad loans, and to order lenders to deal with their debts under new bankruptcy laws.

"We have been consistently demanding that the government should come down heavily against those big corporates (who default on payments). Without which Indian banking cannot be revived," Tuljapurkar said.

The union chief also said that bank employees' workloads had increased since Prime Minister Narendra Modi was elected four years ago and implemented a number of economic initiatives.

A sudden move in late 2016 to devalue 86 per cent of India's currency sparked long lines at ATMs and chaotic scenes at banks.

Many poorer Indians, reliant on cash, were left scrambling to buy basic necessities as their meagre savings evaporated in an instant.