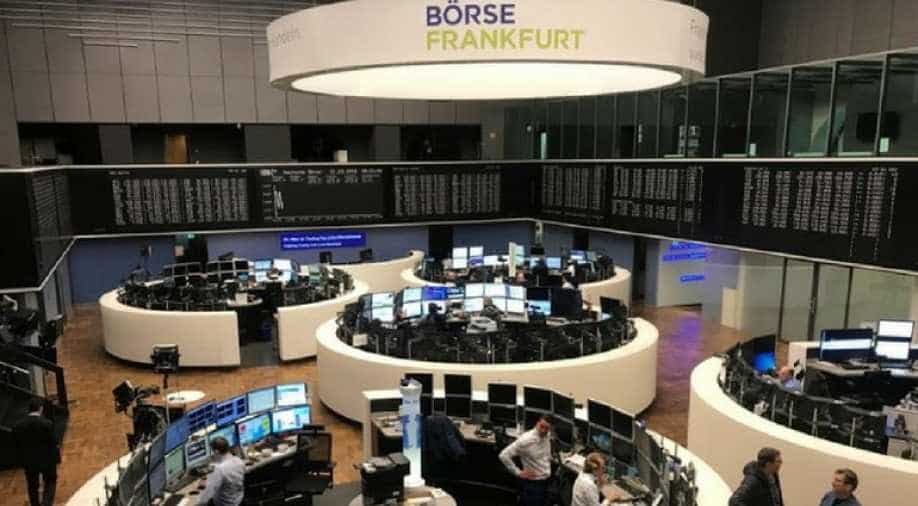 The German share price index, DAX board, is seen at the stock exchange in Frankfurt, Germany. Photograph:( Reuters )

European stocks rebounded Thursday on news that Beijing and Washington will hold trade talks, while the Turkish lira rose after Qatar offered to invest $15 billion in Turkey.

Asian indices fell Wednesday on concerns over Turkey's crisis, but losses were capped by hopes of an end to the tit-for-tat trade war between China and the United States.

Frankfurt, London and Paris shares bounced higher, having shed more than 1.5 per cent the previous day on Turkey fears and Chinese growth concerns.

"Reports that China has accepted a US invitation to trade talks in late August and news that Qatar has pledged to invest $15 billion in Turkey are helping market risk sentiment and pressuring the dollar."

Emerging market currencies staged a modest recovery after a tumultuous week for the Turkish lira, which plumbed record lows against the dollar.

The lira's plunge -- ongoing for weeks -- turned into a rout last Friday when US President Donald Trump tweeted that his administration was doubling aluminium and steel tariffs for Turkey.

Trump's decision was made amid a bitter row over Ankara's detention of an American pastor. But President Recep Tayyip Erdogan said Turkey was facing an "economic attack".

However, the prospect of US-China talks "has prompted a rebound in the Chinese renminbi from its recent lows, while the continued recovery in the Turkish lira has alleviated short-term concerns of a collapse in the currency", noted CMC Markets analyst Michael Hewson.

Traders saw a glimmer of hope of a detente in the ongoing trade battle that has seen the two sides hit each other with reciprocal tariffs on goods so far worth $34 billion.

Washington and Beijing plan to launch a new round of tariffs on $16 billion worth of goods from each country on August 23.

Back in Europe on Thursday, London stocks were aided by strong UK retail sales data for July.

Frankfurt meanwhile gained 0.3 per cent, despite another plunge in the share price of Bayer.

The German chemicals and pharmaceuticals giant dived 5.67 per cent to 76.21 euros, rocked by media reports of new legal risks stemming from its acquisition of US seeds and pesticides maker Monsanto.

The stock had fallen even more dramatically on Monday after a US jury ordered it to pay almost $290 million in damages to a dying California groundskeeper who said Monsanto's blockbuster weedkiller Roundup -- whose active ingredient is glyphosate -- had caused his cancer.